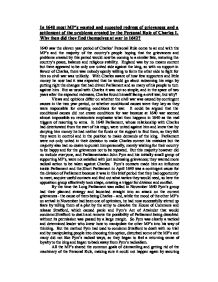 In 1640 most MP's wanted and expected redress of grievances and a settlement of the problems created by the Personal Rule of Charles I. Why then did they find themselves at war in 1642?

In 1640 most MP's wanted and expected redress of grievances and a settlement of the problems created by the Personal Rule of Charles I. Why then did they find themselves at war in 1642? 1640 saw the eleven year period of Charles' Personal Rule come to an end with the MP's and the majority of the country's people hoping that the grievances and problems created by this period would now be coming to a similar fate, restoring the country's peace, balance and religious stability. England was by no means content but there appeared to be only one united side against the king, so with no support in favour of Charles, there was nobody openly willing to form the other side to fight for him so civil war was unlikely. With Charles aware of how few supporters and little money he now had it was expected that he would go about redeeming his reign by putting right the changes that had driven Parliament and so many of his people to turn against him. But as usual with Charles it was not so simple, and in the space of two years after the expected redresses, Charles found himself facing a civil war, but why? Views and opinions differ on whether the civil war was caused by contingent causes in the two year period, or whether conditional causes were they key as they were responsible for creating conditions for war. It could be argued that the conditional causes did not create conditions for war because at 1640 war seemed almost impossible so revisionists emphasise what then happens in 1640 as the real triggers of resorting to arms. ...read more.

So they proposed Parliament should control the army, which was a serious challenge to his authority, and many MP's recognised they were going too far. The second trigger, and perhaps the ultimate push for collapse, was The Grand Remonstrance on November 22nd, a document introduced by Pym, summarising the achievements of Parliament when they were united to show what they were capable of when fighting for the same causes, and also it set out the remaining challenges they wanted to achieve in an attempt to reunite them. Pym gave it to Charles so he knew their plans, then on December 6th he presented the king with a militia bill that stated Parliament should approve his choice of commanders, another power taken from him. The last straw came when Pym decided to publish the Grand Remonstrance on 15th December so the public could read it and insight a mob against the king. A huge amount of the MP's were now in uproar, knowing this was serio0usly overstepping their rights and realising that they were taking away too much of the king's power, and were no firmly on the king's side. Pym had turned his group from a majority to a minority and now found that people were willing to fight against him. The unity of Parliament had effectively collapsed and the king now found himself with support and now that he was angry, he was much more likely to use military means than legal. Charles could have used this to his advantage but yet again, it is his personality and manner of ruling that became the final trigger to war. ...read more.

Another conditional cause was his ongoing bad relationship with Parliament which meant that they too began to oppose him, and his decisions and choices he made with his dealings with Parliament just made matters worse and worse until they ended in the ultimate outcome of war. His Personal Rule was a conditional cause that started the dislike for the king and the policies that were so detested, so those eleven years were a major factor in turning his people against him enough to fight him. But I believe it was the contingent causes that were what made MP's find themselves at war by 1642 because although at 1640 Charles was unpopular and in a bad position, there wasn't a threat of war, just redress of grievances. But in the two years between 1640-42 the contingent causes of the Irish Rebellion, the Short and Long Parliament, Pym and his supporters, the publish of the Grand Remonstrance and the attempted arrest of five members of Parliament, were all triggers one after another that lead inevitably to war. The MP's could not just blame Charles for the outbreak of war because many of the contingent causes were orchestrated by themselves and it could be looked upon that they forced Charles into calling a war, but mistakes and errors of judgement were made by both sides. Many believe that it was more Charles fault than Parliaments because of the mistakes he made in his reign but on the other hand it can be argued that Parliament, through Pym and his supporters, became the radical side, not the king, so it was down to them. I believe both share the blame and they found themselves at war because of conditional causes creating an atmosphere that created a possibility for war, then numerous trigger causes that lead to the outbreak. ...read more.