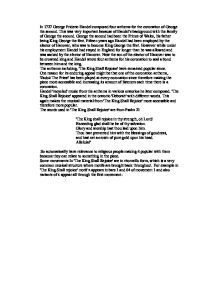 In 1727 George Frideric Handel composed four anthems for the coronation of George the second.

Exceeding glad shall he be of thy salvation. Glory and worship hast thou laid upon him. Thou hast prevented him with the blessings of goodness, and hast set a crown of pure gold upon his head. Alleluia!' So automatically have relevance to religious people making it popular with them because they can relate to something in the piece. Some movements In 'The King Shall Rejoice' are in ritornello form, which is a very common musical structure where motifs are brought back throughout. For example in 'The King Shall rejoice' motif x appears in bars 1 and 64 of movement 1 and also variants of x appear all through the first movement: This makes the piece very easy to listen to because people like familiarity. ...read more.

Making similarities between modern music and the coronation anthems is important in determining why the pieces have stayed popular because people can relate to the key signatures in this piece because they still hear them today. Handel has many influences in this music. In 'The King Shall Rejoice' we can see examples of French influence in his use of hemiola: Handel also uses Italianate textures in the second movement when he has a three part instrumental texture: These different Influences in and English Anthem make 'The King Shall Rejoice' stand out from other baroque anthems and also make it pleasing to other cultures. The 5th Movement of 'The King Shall Rejoice' is an Alleluia chorus, very common in anthems and also very popular, so although this is very clich� and obvious it is very effective in keeping the piece popular. ...read more.