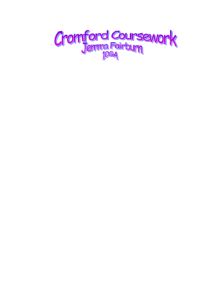 In 1781 Arkwright finished his partnership with Strutt but kept his mill at Cromford.

Introduction Sir Richard Arkwright was an extremely significant figure in the Industrial Revolution. Born in Preston on December 23rd, 1732, Arkwright was the youngest of thirteen children in a poor family. He was apprenticed to a barber and became a wigmaker in Bolton. He travelled the country buying women's hair for wigs, and during his journeys he came across people involved in weaving and spinning. In 1769 Arkwright patented the water frame, a machine that produced tightly woven cotton. The yarn produced was of a much finer and firmer texture than that spun by the spinning jenny. Horses powered the first water frame, but that process was too expensive so he decided water was a more effective source of power. Arkwright became a partner with Jedediah Strutt, a wealthy hosiery manufacturer. In 1771 the partners built a water-powered mill at Cromford and were employing 600 people by 1774. Arkwright had built rows of terrace houses in Cromford for the workers of his mill. In 1781 Arkwright finished his partnership with Strutt but kept his mill at Cromford. Arkwright went on to build cotton factories at Manchester, Matlock, Bath and New Lanark. Arkwright served as High Sheriff of Derbyshire in 1786 and was knighted in the same year. ...read more.

Arkwright chose Cromford because it was a small village with a fast flowing river called Bonsall Brook. The water was relatively warm due to the nearby springs so this ensured the water never froze in the winter, which was good for Arkwright's purposes. Cromford was a good choice because there was a lot of unemployment, so there was an available workforce to employ. Also the land was cheap and because it was rural countryside, there was a great deal of secrecy to protect his ideas. Source one shows the houses that Richard Arkwright built for his workers. This shows that Cromford was chosen because of the great amount of land available to build his village. Source nine shows a modern map of Cromford. This shows how Cromford changed from a small village named Scarthin, containing only lead mines, a chapel, a few farms, and a raging river with a very small community of people to a busy village. Source five is the 250th birthday anniversary brochure, produced by the Arkwright Society. This can be used to show that the Cromford site was successful. "1771, he built a mill in Cromford...this was the world's first successful water-powered cotton spinning mill." Source 10 is a contemporary song about Cromford. ...read more.

Also by 1800 the village had everything it needed to be a success. When Richard Arkwright Jr. took over Richard Arkwright's responsibilities he had no real interest in the cotton industry to make any further changes. One of the reasons for the limit of change in Cromford was the competition it was receiving from other towns and cities. Before Arkwright came to Cromford it was a small hamlet so the growth rate was low. In 1771 the changes increased rapidly. These changes took place until 1800 where the growth rate slowed. The main changes after 1800 was the Cromford and high peak railway. This changed Cromford a great deal. It was one of the first built in the country, but took awhile to make a profit. I used sources 1,2,5,9 and 10 from 'Cromford coursework 1998'. Source 1 shows the houses that Arkwright built in the 18th century. Source 2 shows extracts from Viscount Torrington's Derbyshire Journey 1781. Source 5 is a 250th Birthday Anniversary Brochure, produced by The Arkwright Society in 1982. Source 9 is a modern map of Cromford village. Source 10 is a contemporary song from around 1790 about Richard Arkwright and his mills. I think that Cromford changed a great deal between 1770 and 1840. My reason for this is that Richard Arkwright changed Cromford into a bustling and successful village. ...read more.