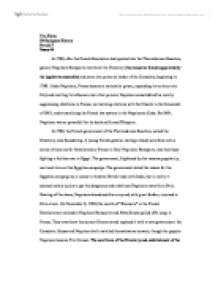 In 1799, after the French Revolution had quieted into the Thermidorean Reaction, general Napoleon Bonaparte overthrew the Directory

Tim Flynn IB European History Period 3 Essay #6 In 1799, after the French Revolution had quieted into the Thermidorean Reaction, general Napoleon Bonaparte overthrew the Directory (the executive branch appointed by the legislative assembly) and came into power as leader of the Consulate, beginning in 1799. Under Napoleon, France became a nationalist power, expanding its territory into Italy and exerting its influence over other powers. Napoleon consolidated his rule by suppressing rebellions in France, normalizing relations with the Church in the Concordat of 1801, and streamlining the French law system in the Napoleonic Code. By 1804, Napoleon was so powerful that he declared himself Emperor. In 1799, the French government of the Thermidorean Reaction, called the Directory, was floundering. A young French general, having already won fame with a series of victories for Revolutionary France in Italy Napoleon Bonaparte, was then busy fighting a fruitless war in Egypt. The government, frightened by his massive popularity, next sent him on this Egyptian campaign. The government stated the reason for the Egyptian campaign as a means to threaten British trade with India, but in reality it seemed mostly a ploy to get the dangerous and ambitious Napoleon away from Paris. ...read more.

Napoleon ended the exclusion of the nobility from power that had been the trademark of earlier post- revolution regimes. Moreover, Bonaparte won favor with the Catholics who felt persecuted by the de-Christianization that occurred during the revolution. Though unreligious, in 1801, Napoleon signed a Concordat with the Catholic pope. This agreement also smoothed over the rift between France and Rome that the Revolution had caused, in which the French state assumed control over appointment of bishops and confiscated church lands. With the Church officially at odds with France, the clergy (influential with the masses) would become a source of resistance to his government (as could be seen in the revolt in the Vendee during the Terror of the French Revolution). By gaining recognition from the Pope, who was bound to comply since Napoleon's armies threatened the Papal States, Napoleon ended this potential source of conflict Napoleon did not give the property back, but he did make Catholicism the official religion of France, admitting that the majority of France was Catholic. In exchange, the Vatican recognized the Consulate. ...read more.

The Napoleonic Code was one of Napoleon's most important creations. The Napoleonic Code created a single, streamlined system of law, which enshrined the basic tenants of the Revolution, not the least of which was the legal equality of all citizens. In 1802, having brought prestige, power, and a sense of patriotism to France, Napoleon was elected "Consul for Life". Monarchy was returning to France. In 1804, Napoleon did away with niceties and proclaimed himself what he had already been in reality for some time: the French Emperor. Napoleon's reign, though in essence a dictatorship, was the fusion of a familiar political structure and old forms with that of new ideology and reform. Bonaparte overthrew the Directory and he was able to consolidate his rule through war and by normalizing relations with the Catholic Church. Yet at the same time he kept the tenets of the French Revolution alive and recognized religious toleration through reform and the establishment of the Napoleonic Code. Initially, Napoleon's time in power was wise as he avoided the pitfalls committed by the old monarchy and revolutionary politicians before him; the result was an excellent start to a reign which would ultimately end in failure. ...read more.