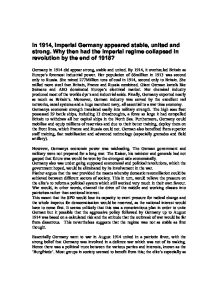 In 1914, imperial Germany appeared stable, united and strong. Why then had the imperial regime collapsed in revolution by the end of 1918?

In 1914, imperial Germany appeared stable, united and strong. Why then had the imperial regime collapsed in revolution by the end of 1918? Germany in 1914 did appear strong, stable and united. By 1914, it overhauled Britain as Europe's foremost industrial power. Her population of 66million in 1913 was second only to Russia. She mined 277Million tons of coal in 1914, second only to Britain. She milled more steel than Britain, France and Russia combined. Giant German kartels like Seimens and AEG dominated Europe's electrical market. Her chemical industry produced most of the worlds dye's and industrial acids. Finally, Germany exported nearly as much as Britain's. Moreover, German industry was served by the excellent rail networks, canal systems and a huge merchant navy, all essential to a war time economy. Germanys economic strength translated easily into military strength. The high seas fleet possessed 29 battle ships, including 13 dreadnoughts, a force so large it had compelled Britain to withdraw all her capital ships in the North Sea. Furthermore, Germany could mobilise and equip millions of reservists and due to their better training, deploy them on the front lines, which France and Russia could not. German also benefited from superior staff training, fast mobilisation and advanced technology (especially grenades and field artillery). ...read more.

The losses for Germany were particularly heavy. It wasn't long before the German army became disillusioned and tired of the fighting. The source shows German soldiers resting in a trench near Ypres in Flanders. Picture made in the beginning of the trench warfare. Approximately 2.4 million people were killed with even more wounded and permanently disabled. The shortage of food and imports became especially serious in 1917. This was partly because of the growing success of the British naval blockade and partly because of a cold winter in 1916-17 and a poor harvest in the summer of 1917. In 1918 civilian deaths alone totalled 293,000 (partly due to poor diets which led to disease and death). The German economy was dislocated through its deprivation of vital imports of raw materials and food. There was no alternative but to undergo total mobilisation to enable the military to try to break through the strategic stalemate on the western front. This was one of the significant factors, which contributed to the eventual collapse of the regime and revolution in Germany. The army's intrusions into Germany economy, politics and even civilian lives, was seen as particularly unacceptable, especially since it was mainly the working classes which were having to suffer. At first the army's total mobilisation was only confined to the economic sector, with the establishment of the Raw Materials Department (KRA), which was responsible for distribution of key raw materials to where they were needed the most. ...read more.

The military leaders realised that they wouldn't be able to win the war and a revolution emerged. A German military victory would almost certainly have defused the crisis and in so doing retarded the process of political reform for a generation or more. Instead, four years of total war culminating in defeat brought the Kaiser to his knees, forcing him to eventually flee and bring the end of the second Reich. The political system of the imperial regime was based around the Kaiser and when the Kaiser was eliminated from the equation, with him went his Reich, as it could not function without him. The war also massively dislocated the economy, wrecking the already parlous government finances, which in turn initiated run-away monetary inflation. Although many industrialists had benefited from the war, a lot more did not. The government had promised an expansion in the economic market (due to the reparations, which Germany would receive had it been victorious, from the allies), when it did not hold to its word, it lost the support of many industrialists, for whom the government was no longer beneficial. Furthermore, the war was the cause of serious social tensions, which accentuated class differences. And it exacerbated the polarisation of politics of the Kaiserreich. The pre-war Germany there had been constitutional instability and occasional political crises. By the autumn of 1918 however, Germany found itself in a revolutionary situation. ?? ?? ?? ?? ...read more.