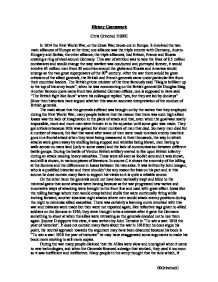 In 1914 the First World War, or the Great War, broke out in Europe.

History Coursework Chris Grindrod 11SRH In 1914 the First World War, or the Great War, broke out in Europe. It involved the two main alliances of Europe at the time; one alliance was the triple entente with Germany, Austro-Hungary and Serbia, the other alliance, the triple alliances, had Britain, France and Russia creating a ring of steel around Germany. This war of attrition was to take the lives of 8.5 million combatants and would change the way warfare was conducted and portrayed forever, it would involve 65 million men from 30 countries around the globe and Russia and America would emerge as the two great superpowers of the 20th century. After the war there would be great criticism of the allied generals, the British and French generals came under particular fire from their countries leaders. The British prime minister of the time famously said "Haig is brilliant up to the top of his army boots", when he was commenting on the British general Sir Douglas Haig. Another famous quote came from two defeated German offices, one is supposed to have said "The British fight like lions" where his colleague replied "yes, but they are led by donkeys" Since then historians have argued whether this was an accurate interpretation of the conduct of British generals. ...read more.

This left each division with sixty-four machine guns, but even by the end of the war there was only forty two to a division. During the Great War many areas of technology improved a great deal. Manned flight, flamethrowers, gas warfare and tank warfare were at the forefront of British technological advances. Before the war aircraft were used for reconnaissance and the RFC, or the Royal Flying Corps, consisted of 4 battle squadrons, one of which was a balloon squadron, which had been in operation since 1881. In the early days of the war the RFC was still being used for reconnaissance and there was no hostility between enemy aircrew, until in early 1915 when a French airmen pulled his revolver out and took a pot shot at a German aircraft but left him uninjured. Since then both armies took an active interest in improving the quality and fire power of their aircraft, in 1915 a French engineer managed to combine the propeller and machine guns mechanisms on an aircraft to make the gun fire in between each propeller. In the air the allies were certainly the underdog until the British army began to design new planes such as the Bristol Fighter, Sopwith Pup, Sopwith Camel, S.E.5 and Airco DH-2 and then the death tolls started to decline among British pilots. ...read more.

The German army had been preparing for this war for nearly a decade before war was declared and when it was, the British Generals had to use a relatively inexperienced army made up of men from other professions and they had only 100,000 professional soldiers and these men were nearly wiped out in the first battle of Ypres. The Generals themselves were inexperienced in this type of warfare as well, they had been used to battling armies in the colonies that didn't use guns so cavalry regiments were still needed and artillery was less useful, but now it was the other way round and cavalry regiment had to be used in support and artillery played a much more important factor, many of the Generals were reluctant to use cavalry less as well because many of them were ex-cavalry officers so this may have affected their thinking as well. I think that Haig and the other Generals adapted as quickly as they could have considering what type of warfare they had been used to and what type of warfare they expected so the title 'donkeys' is an unfair interpretation of the conduct of British Generals in World War One. 00GrindrodC ...read more.