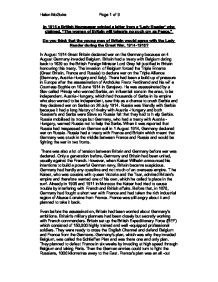 In 1915 a British Newspaper printed a letter from a 'Lady Reader' who claimed, &quot;The women of Britain will tolerate no such cry

In 1915 a British Newspaper printed a letter from a 'Lady Reader' who claimed, "The women of Britain will tolerate no such cry as Peace." Do you think that the young men of Britain would agree with the Lady Reader during the Great War, 1914-1918? In August 1914 Great Britain declared war on the Germany because on 4 August Germany invaded Belgium. Britain had a treaty with Belgium dating back to 1839 so the British Foreign Minister Lord Grey felt justified in Britain honouring this treaty. The invasion of Belgium forced the Triple Entente (Great Britain, France and Russia) to declare war on the Triple Alliance (Germany, Austria-Hungary and Italy). There had been a build up of pressure in Europe after the assassination of Archduke Franz Ferdinand and his wife Countess Sophie on 18 June 1914 in Sarajevo. He was assassinated by a Slav called Princip who wanted Serbia, an influential state in the area, to be independent. Austria-Hungary, which had thousands of Serbs in its empire who also wanted to be independent, saw this as a chance to crush Serbia and they declared war on Serbia on 28 July 1914. Russia was friendly with Serbia because it had a long history of rivalry with Austria-Hungary and both Russian's and Serbs were Slavs so Russia felt that they had to help Serbia. Russia mobilised its troops but Germany, who had a treaty with Austria-Hungary, warned Russia not to help the Serbs. When it was reported that Russia had trespassed on German soil in 1 August 1914, Germany declared war on Russia. Russia had a treaty with France and Britain which meant that Germany was stuck in the middle between France and Russia and would be fighting the war in two fronts. There was also a lot of tension between Britain and Germany before war was declared. Only a generation before, Germany and Britain had been united, usually against the French. ...read more.

The generals had no idea how to defend against machine guns since they were trained in the kind of warfare that had been seen in the Crimea and the Boer War, including cavalry charges on horseback. The way this war was being fought, with a regular supply of new soldiers, with machine guns that didn't call for accurate fire, with barbed wire across no man's land, was completely different to anything that had gone before. Both sides' generals had no other answer than to dig trenches. A full frontal attack by either side could prove fatal although the French and British troops had the hardest task. They needed to retake land whereas the Germans only had to stay in their trenches and defend it. In November 1914, soldiers found themselves fighting from trenches. However, the conditions were far from perfect. Millions of men and thousands of horses lived close together and the sanitation arrangements were makeshift. In the summer, when the weather was hot, dusty and dry, the smell was appalling due to a combination of rotting corpses, sewage and unwashed soldiers. In wet weather spent much of their time up to their ankles or knees in water. Thousands suffered from 'trench foot', caused by standing in water for hours or days. As one soldier described it "Your feet swell up two or three times their normal size and go completely dead. You could stick a bayonet into them and not feel a thing. If you are fortunate enough not to lose your feet and the swelling begins to go down...it is then that the agony begins." Some men had to have their legs amputated because of trench foot but some got amputated because of frostbite in the winter, as the trenches offered little protection from the cold. The trenches were also infested by rats, which were described as huge, fat 'corpse' rats that thrived on the dead bodies and the rubbish created by the armies. ...read more.

However, the scene on the Western Front was the opposite. David Jones wrote, "He would not be killed...no one else in the battalion would be killed...A thrill of almost painful exultation went through him...Then with a worse, almost unmendable pang, he thought of the millions of men of many nations, who were gone forever, rotting in desolate battlefields and graveyards all over the world...Would they dare to maffick [celebrate wildly] in London and Paris? Probably. Well let them. Perhaps the men's quietness and lack of demonstration meant they too felt this....The only victory that had resulted was in fact the victory of life over death, of stupidity over intelligence, of hatred over humanity. It must never happen again, never, never." Even though the British soldiers had fought loyally, many of them had lost faith in their generals. As Private J A Hooper said, "Towards the end of the war we were so fed up we couldn't even sing 'God Save the King' on church parade. 'Never mind the bloody King,' we used to say, 'he was safe enough. It should have been God save us.' They realised they had been lied to. The idea that the Germans were beasts, an idea the newspapers had made out at the beginning of the war, was not understood to be false. Many British soldiers saw them as no different from them. Many people also began to question why the war had started at all. Everyone had been affected by the war. Families had been torn apart through death; a whole generation of men were lost forever. Even the men who had survived were never the same. Many of them were disabled, or shell-shocked, and all of them had seen things that no-one should see. They had scars inside and out. Four years after the Lady Reader's comment, no one would have agreed with her. World War One was the war to end all wars, although it never really ended. ?? ?? ?? ?? Helen McGuire Page 1 of 9 ...read more.