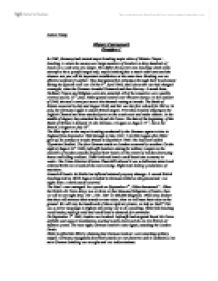 In 1940, Germany had started carpet bombing major cities of Britain.

Louise Trump History Coursework Question 1 In 1940, Germany had started carpet bombing major cities of Britain. Carpet-bombing, is where the enemy uses large numbers of bombers to drop hundreds of bombs on a wide area of a target. This differs from precision bombing which needs aircraft to hit a specific target only, carpet bombing hits a much wider area and the chances are you will hit important installations at the same time. Bombing was an effective method of warfare. They had gained this technique through their involvement during the Spanish civil war. On the 9th April 1940, ideas about the war had changed overnight, when the Germans invaded Denmark and then Norway. A month later, Holland, France and Belgium were also attacked. All of the countries were quickly overrun and by 22nd June, Hitler gained control over Western Europe. In the summer of 1940, the nazi's were just across the channel waiting to invade. ...read more.

Hitler believed bombs could knock out a country in weeks. The Prime Minister Winston Churchill believed it was a deliberate attack and ordered Berlin to be bombed the next evening. Night raids held up productions of munitions. Around 40 bombs hit Berlin but inflicted minimal property damage. A second British bombing raid on 28/29 August resulted in Germans killed on the ground and two nights later, a third attack occurred. The Nazi's were outraged. In a speech on September 4th, Hitler threatened "...When the British Air Force drops two or three or four thousand kilograms of bombs, then we will in one night drop 150-, 230-, 300- or 400,000 kilograms. When they declare that they will increase their attacks on our cities, then we will raze their cities to the ground. We will stop the handiwork of those night air pirates, so help us God!" ...read more.

The success in bombing London by night encourages Germans to try and attack during the day. On 15th September they attacked London during daylight. This was the biggest raid of the war so far. Hitler's intention was to break the morale of the British people so that they would pressure Churchill into negotiating. However, the bombing had the opposite effect, bringing English people together to face an enemy. By the end of 1940, German air raids had killed 15,000 British civilians. One of the worst attacks occurred on the night of November 14th against Coventry, an industrial city east of Birmingham. 449 German bombers dropped 1,400 high explosives bombs and 100,000 incendiaries, which destroyed 50,000 buildings and killed 568 people. Churchill had been told in advance of this raid because the secret intelligence centre had been able to decode monitored Luftwaffe orders with it's German "Enigma" coding machine. Churchill had been unable to increase Coventry's defences or give warning. Attacks died down in May 1941 as the Germans moved planes east to prepare for the invasion of the Soviet Union. ...read more.