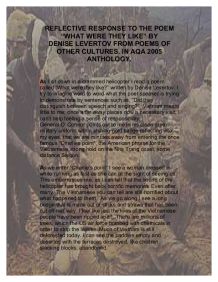 In a crammed helicopter I read a poem called &quot;What were they like?&quot; written by Denise Levertov. I try to imagine word to word what the poet speaker is trying to demonstrate by sentences such as, &quot;Did they distinguish between speech and singing?&quot; Vietnam

REFLECTIVE RESPONSE TO THE POEM "WHAT WERE THEY LIKE" BY DENISE LEVERTOV FROM POEMS OF OTHER CULTURES. IN AQA 2005 ANTHOLOGY. As I sit down in a crammed helicopter I read a poem called "What were they like?" written by Denise Levertov. I try to imagine word to word what the poet speaker is trying to demonstrate by sentences such as, "Did they distinguish between speech and singing?" Vietnam meant little to me; once a far away places now a necessary visit, I can't help feeling a sense of responsibility. General O' Connor points out to me in his clean green military uniform with a shining gold badge reflecting into my eyes, that we are minutes away from entering the once famous "Charlies point", the American phrase for the Vietnamese strong hold on the Nha Trang coast, some distance Saigon. ...read more.

As we go along I see a long bridge that is made out of sticks and straws that has been cut off half way. I feel like just the lives of the Vietnamese people have been ripped apart. There are millions of trees, which the US air force bombed with chemicals in order to strip the leaves. Much of Vietnam is still deforested today. I can see the paddies empty and deserted with the terraces destroyed, like children stacking blocks, abandoned. As we travel along we see a group of Vietnamese women as if in a circle of reverence. This makes me weep as the worst is set to come. ...read more.

My hand reaches out but only cold steel is there to comfort me. As I leave Vietnam I can clearly understand why the woman were scared of us; a helicopter to them must be a monstrous predator ready to attack. The atmosphere in Vietnam is horrible; there is an eerie silence. The things I saw today were worse than what I had expected. I leave wondering whether the war was worth it? From the poem I remember the verse "When bombs smashed those mirrors there was time only to scream". The child's doll left abandoned with its melted face screams its message at me - war dissolves and wipes out.... Smashes into smithereens that which cant be put back together. Mohammad Mohsin ...read more.