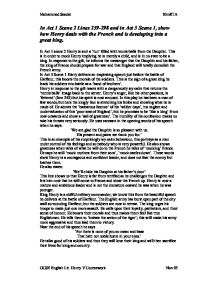 In Act 1 Scene 2 Lines 259-298 and in Act 3 Scene 1, show how Henry deals with the French and is developing into a great king. In Act 1 scene 2 Henry is sent a 'tun' filled with tennis balls from the Dauphin. This is in order to mock Henry implying he is merely a child, and is in no state to be a king. In response to the gift, he informs the messenger that the Dauphin and his father, the king of France should prepare for war and that England will totally demolish the French army. In Act 3 Scene 1 Harry delivers an inspirating speech just before the battle of Harfleur, this boosts the morale of the soldiers. ...read more.

The humility of his confession makes us take his threats very seriously. He uses sarcasm in the opening words of his speech when he says: 'We are glad the Dauphin is so pleasant with us. His present and pains we thank you for.' This is an example of his surprisingly icy calm behaviour, this portrays as a man under control of his feelings and somebody who is very powerful. He also shows greatness when talks of what he will do to the French he talks of 'mocking' France. He says he will 'mock mothers from their sons', 'mock castles down'. These words show Henry is a courageous and confident leader, and does not fear the enemy but loathes them. ...read more.

He boosts their morale and thus makes them feel like true Englishmen. He tells them to 'imitate the action of the tiger'; this will make his army more aggressive and thus lead them to victory. Near the end of his speech he says 'For there is none of you so mean and base That hath not noble lustre in your eyes.' He talks good of his soldiers and thus they will love their king and will then sacrifice their lives for king and country. We learn from these two acts that King Henry is a responsible leader who achieves his goals through courage and sincerity. Kingship has changed him from a cowardly, indecisive young boy into a determined and persuasive king. ?? ?? ?? ?? Mohammed Seedat 10mRTA GCSE English Lit. Henry V Coursework Nov 05 ...read more.