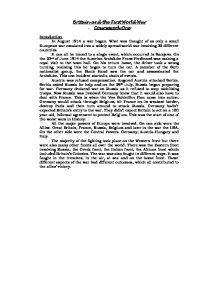 In August 1914 a war began. What was thought of as only a small European war escalated into a widely spread world war involving 32 different countries.

Britain and the First World War - Coursework One Introduction In August 1914 a war began. What was thought of as only a small European war escalated into a widely spread world war involving 32 different countries. It can all be traced to a single event, which occurred in Sarajevo. On the 23rd of June 1914 the Austrian Archduke Franz Ferdinand was making a royal visit to the town hall. On his return home, the driver took a wrong turning, realising this he began to turn the car. A member of the Serb nationalist group, the Black Hand saw the car and assassinated the Archduke. This one incident started a chain of events. Austria was refused compensation. Angered Austria attacked Serbia. Serbia asked Russia for help and on the 29th July, Russia began preparing for war. Germany declared war on Russia as it refused to stop mobilising troops. Now Russia was involved Germany knew that it would also have to deal with France. This is when the Von Schleiffen Plan came into action. Germany would attack through Belgium, hit France on its weakest border, destroy Paris and then turn around to attack Russia. Germany hadn't expected Britain's entry to the war. They didn't expect Britain to act on a 100 year old, informal agreement to protect Belgium. This was the start of one of the worst wars in History. ...read more.

Surveillance planes that spied on the enemy troops would pick up any troop movement or faults in their own lines and generals would be able to prepare their next plan of attack. The planes could fly low since they were quiet, making it harder for them to be spotted. Soon they began to carry cameras and photographs were taken of enemy lines. In 1915 the German Fokker E-2 flew into the skies. It was the first fighter plane designed to destroy surveillance planes. It had a machine gun, synchronised with the propellers, so they wouldn't be shot off. The first aeroplane dogfights were introduced and with them the hero pilots. These heroes raised morale in Britain and Germany. Their exploits made exciting reading. Manfred Von Richtoffen was the German role model. Nicknamed the Red Baron he shot down 80 enemy planes before his death in 1917. The French Rene Fonk, was the only pilot to shoot down 75 enemy planes and survive the war. Dogfights weren't very important but were necessary in raising morale from soldiers and the home front. Trench soldiers would hear about the dogfights and would feel that the war was getting somewhere. They would feel confident and believe their side was winning the war. Germany, once again, invented the first bombers, zeppelins. They bombed British coastal areas. Now even people inland were in danger of plane and zeppelin attacks. Unfortunately zeppelins were large, slow and easily shot down before they could do any damage. ...read more.

Conclusion Changes on the home front helped to keep Britain in the war. They ensured that the country kept going even though a lot of its population had gone to fight in the war. The introduction of DORA gave the government complete control of the country and allowed them to provide for the army as well as the people back home. Conscription also made sure that there were always plenty of soldiers to fight in the war and that Britain would not be defeated because its Professional Army had been wiped out. The home front was a crucial part of the war as it kept up morale at home so people felt their was a need for the war and that it wasn't a waste of time. Without this morale Britain would have had to pull out of the war and the Central Powers would most likely have been the victorious powers. The Western front was the front which most of the fighting took place. It was where the two alliances had reached stalement. They dug out trenches in the ground as defence and spent most of the war in them. A whole system of trenches was soon dug out and both sides fought from within these trenches. The only way to break the stalement would be to destroy all enemies in a trench and to cross no mans land to get into the enemy trenches. On the Eastern Front, Russia was fighting against Germany and Austria-Hungary. ...read more.