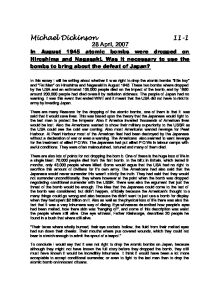 In August 1945 atomic bombs were dropped on Hiroshima and Nagasaki. Was it necessary to use the bombs to bring about the defeat of Japan?

Michael Dickinson 11-1 28 April, 2007 In August 1945 atomic bombs were dropped on Hiroshima and Nagasaki. Was it necessary to use the bombs to bring about the defeat of Japan? In this essay I will be writing about whether it was right to drop the atomic bombs "little boy" and "Fat Man" on Hiroshima and Nagasaki in August 1945. These two bombs where dropped by the USA and an estimated 106,000 people died on the impact of the bomb, and by 1950 around 200,000 people had died overall by radiation sickness. The people of Japan had no warning. It was this event that ended WWII and it meant that the USA did not have to risk its army by invading Japan. ...read more.

The Americans also seemed to want revenge for the treatment of allied P.O.Ws. The Japanese had put allied P.O.Ws in labour camps with awful conditions. They were often malnourished, tortured and many of them died. There are also lots of points for not dropping the bomb. One of these is the huge loss of life in a single blast. 70,000 people died from the first bomb. In the blitz in Britain, which lasted 9 months, only 43,000 people where killed. Some would argue that the USA had no right to sacrifice this amount of civilians for it's own army. The Americans had also said that the Japanese would never surrender this wasn't strictly the truth. ...read more.

One eye witness, Father Kleinsorge, describes 20 people he found in a bush that where still alive. "Their faces where wholly burned, their eye sockets hollow, the fluid from their melted eyes had run down their cheeks. Their mouths where pus covered wounds, which they could not bear to stretch enough to admit the spout of a teapot." To conclude I would say that it was not right to drop the atomic bombs on Japan, because although they might not have known the full story before they dropped the bomb, they still must have known it would be incredibly inhumane. It think it would have been a lot more acceptable to accept conditional surrender, or even to fight to the last man than to drop the atomic bomb on innocent citizens. ...read more.