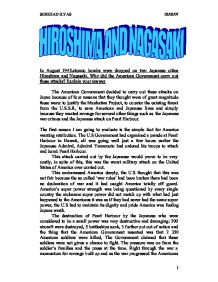 In August 1945,atomic bombs were dropped on two Japanese cities Hiroshima and Nagasaki. Why did the American Government carry out these attacks? Explain your answer

In August 1945,atomic bombs were dropped on two Japanese cities Hiroshima and Nagasaki. Why did the American Government carry out these attacks? Explain your answer The American Government decided to carry out these attacks on Japan because of four reasons that they thought were of great magnitude these were: to justify the Manhattan Project, to counter the existing threat from the U.S.S.R, to save American and Japanese lives and simply because they wanted revenge for several other things such as the Japanese war crimes and the Japanese attack on Pearl Harbour. The first reason I am going to evaluate is the simple fact for America wanting retribution. The U.S Government had organized a parade at Pearl Harbour in Hawaii, all was going well just a few hours earlier the Japanese Admiral, Admiral Yamamoto had ordered his troops to attack and bomb Pearl Harbour. This attack carried out by the Japanese would prove to be very costly, in spite of this, this was the worst military attack on the United States of America ever carried out. This embarrassed America deeply, the U.S thought that this was not fair because the so called 'war rules' had been broken there had been no declaration of war and it had caught America totally off guard. America's super power strength was being questioned by every single country the nickname super power did not match up with what had just happened to the Americans it was as if they had never had the name super power, the U.S had to maintain its dignity and pride America was feeling Japans wrath. ...read more.

The bomb would, the Americans hoped would bring to a swift end the war, which was against fanatically determined enemies. America wanted to end the Second World War quickly and get their soldiers back home. America also wanted to retreat to traditional U.S isolationism, they did not want to be in a war or sorting other countries war's out. People moved to America in the first place to get away from the world's problems and Americans wanted to get on with normal life again. It has been indicated that the bomb was dropped to boost Truman's election campaign, if he could say to the people that he was the one that got the soldiers home with out too many casualties then obviously the citizens are going to support him for his correct decision and for the man who ended World War Two. It was said, by President Truman that the bomb would 'save lives.' How could this be? When the bomb was dropped on Hiroshima at 8.15am on 6th August 1945 where 70 000 people died instantly and a further 100 000 died as a result of being injured by the initial blast. Three days later on the 9th August America dropped another bomb this time on a city called Nagasaki. This resulted in the death of 80 000 Japanese civilians. By dropping the bomb a total of 250 000 innocent Japanese people were killed this included women and children and in particular workers homes and factories were targeted. Now moving on to Russia, the Americans felt like they had something to prove to the Russians. ...read more.

This was what Truman Thought of the bombs: "This is the greatest thing in History" "New and revolutionary" In a Gallup poll in the streets of America people were asked if they approved of the bomb being dropped and 85% of the interviewees were with this and they wanted the bomb to be dropped on Japan. The first bomb was called 'Little Boy' The second bomb was called 'Fat man' the second bomb was much more powerful that the first one and this bomb may not have been dropped to win the war but it may have been dropped to send a message to the Russians. Whilst this bomb was being loaded on to the aeroplane the Americans had the nerve to sign it to the Japanese Emperor and they were autographing it concluding this it is thought that the first bomb was to win the war and the second bomb was to send a message to the Russian Government. Overall it is clear that the United States of America decided to drop the bomb on Japan because of the points that I have mentioned above but I think that the most important reason was that Truman wanted to save lives he made it clear if he had to save one soldiers life at the expense of dropping the bomb then he would do it. Maybe Truman was told to win the war by the former President Roosevelt; he might of asked Truman to win the war for him because Roosevelt made this statement in 1942: "Win through to absolute victory" ?? ?? ?? ?? SHEHZAD ILYAS 02/05/07 1 ...read more.