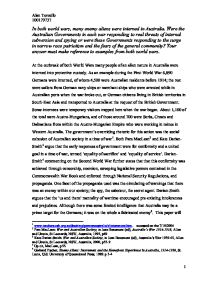 In both world wars, many enemy aliens were interned in Australia

In both world wars, many enemy aliens were interned in Australia. Were the Australian Governments in each war responding to real threats of internal subversion and spying or were these Governments responding to the surge in narrow race patriotism and the fears of the general community? Your answer must make reference to examples from both world wars. At the outbreak of both World Wars many people of an alien nature in Australia were interned into protective custody. As an example during the First World War 6,890 Germans were interned, of whom 4,500 were Australian residents before 1914; the rest were sailors from German navy ships or merchant ships who were arrested while in Australian ports when the war broke out, or German citizens living in British territories in South-East Asia and transported to Australia at the request of the British Government. Some internees were temporary visitors trapped here when the war began. About 1,100 of the total were Austro-Hungarians, and of those around 700 were Serbs, Croats and Dalmatians from within the Austro-Hungarian Empire who were working in mines in Western Australia. The government's overriding rhetoric for this action was the social cohesion of Australian society in a time of war1. Both Pam MacLean2 and Kate Darian-Smith3 argue that the early responses of government were for conformity and a united goal in a time of war, termed 'equality of sacrifice' and 'equality of service'. Darian-Smith4 commenting on the Second World War further states that that this conformity was achieved through censorship, coercion, sweeping legislative powers contained in the Commonwealth War Book and enforced through National Security Regulations, and propaganda. One facet of the propaganda used was the circulating of warnings that there was an enemy within our society; the spy, the saboteur, the secret agent. ...read more.

It is the contention of this paper that the super structure needing to mobilise its war effort resorted to the use of the xenophobic nature of the Australian populace to maintain social control. This point is supported by Gerhard Fischer when he states, "The internment system thus developed into a tool of social control"16. He argues that internment procedures had surpassed its original ideal of National Security during the Great War, and had now taken on the form of social manipulation by the super structure. We see the social control tool at work when in the early years of the war destitute enemy aliens males could give themselves up if without prospect of finding any way to pay for their livelihood. The super structure had manipulated societal expectation and tolerances to force naturalised German/Australians to the point of destitution; and hence it controlled not only the aliens, but had diverted attention from the pressing social issues facing Australia during this epoch of history. The 'social control tool' was now used to segregate this component of Australian society. This segregation continued after the war, as Fischer argues, it was used to "...exclude undesirables residents not only because of their ethnic origin but also because of their socio-economic status"17. People were now being interned due to their employment status or their need to receive charity. Others were interned due to their perceived mental faculties, or previous criminal records. As Fischer argues, "...these immigrants were not at fault. Their lack of success...was entirely due to the war which had changed their status and their chances overnight"18. The question remains as to why these people were treated without compassion? ...read more.