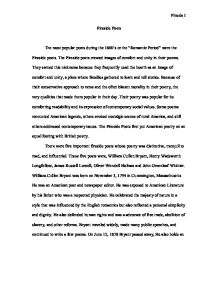 In conclusion the Fireside poets have played a big role in American literature the qualities of their poetry was admirable, relaxing and comforting. The Fireside poets wrote during the time of the abolitionist movement or

Fireside Poets The most popular poets during the 1800's or the "Romantic Period" were the Fireside poets. The Fireside poets created images of comfort and unity in their poems. They earned this nickname because they frequently used the hearth as an image of comfort and unity, a place where families gathered to learn and tell stories. Because of their conservative approach to verse and the often blatant morality in their poetry, the very qualities that made them popular in their day .Their poetry was popular for its comforting readability and its expression of contemporary social values. Some poems recounted American legends, others evoked nostalgic scenes of rural America, and still others addressed contemporary issues. The Fireside Poets first put American poetry on an equal footing with British poetry. There were five important fireside poets whose poetry was distinctive, tranquil to read, and influential. These five poets were, William Cullen Bryant, Henry Wadsworth Longfellow, James Russell Lowell, Oliver Wendell Holmes and John Greenleaf Whittier. ...read more.

Some of his talents were playing the flute and the piano. He attended Bowdoin College there he was asked to become the first professor of Modern Languages. Later Longfellow became a professor of modern languages at Harvard. Longfellow enjoyed writing about nature, He became known as the most famous fireside poet. Longfellow passed away on March 24, 1882 in Cambridge, Massachusetts. Some of Longfellow's famous works were "The First Snowfall", "A Village black smith", "Paul Revere" and "Hiawatha's Childhood. James Russell Lowell was born on 1819 in Cambridge, Massachusetts. He was an American poet, critic and editor. Lowell was educated in Harvard and later became professor of modern languages at Harvard. He abandoned law for literature and started a literary magazine which was called "The Pioneer". He was influential in the intellectual life of New England. Lowell was an ardent abolitionist and was totally against slavery. In 1819 he died. Some of his famous works were "A Fable for Critics", "The Vision of Sir Launfal" and" The Bigelow Papers" In his later writings he turned to scholarship and criticism. ...read more.

After the Civil War he turned from politics and dedicated himself completely to poetry. He made nearly 100 hymns which were best known as "Dear Lord and father of Mankind". Sadly Whittier passed away on September 7, 1892. Some of his famous works were "Newburyport Free Press", "Atlantic Monthly Magazine", "Leaves from Margaret Smith's Journal" and "Legends of New England". He was recognized for being a great poet, and abolitionist and a supporter of women writing poetry. In conclusion the Fireside poets have played a big role in American literature the qualities of their poetry was admirable, relaxing and comforting. The Fireside poets wrote during the time of the abolitionist movement or antislavery movement, it sought to end the enslavement of Africans and people of African descent. Their poetry helped put the reader's minds at peace and ease. They were unique in many different ways and there were no other like them, they set a lasting effect for people of the 1800's and up to this day they are still popular and famous for their works. ?? ?? ?? ?? Pineda 1 ...read more.