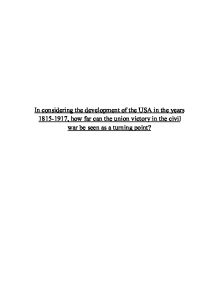 In considering the development of the USA in the years 1815-1917, how far can the union victory in the civil war be seen as a turning point?

In considering the development of the USA in the years 1815-1917, how far can the union victory in the civil war be seen as a turning point? In 1865 America was re-united after the civil war. This was certainly a significant moment for America as the re-unification itself marked an absolute change in American history. For this discussion a 'turning point' will be defined as a point at which a very significant change occurs; a decisive moment. To measure whether American development met this criteria, we must consider the main areas of development in this period the primary areas will be the lives of African Americans and Native Americans, westward expansion and immigration, economic developments and foreign affairs. In the development of the lives of African Americans the union victory did act as a change. In some ways this can be seen as a decisive moment, which would make it sufficient to be described as a turning point. Evidence to support this is that the development of African American lives were improving, as they were creating their own identity, enhancing their religious and cultural believe, therefore the Civil War triumph can be seen as a trigger of freedom for African American, a turning point. ...read more.

as a significant transformation for America but not as a major turning point in migration, clearly migration and westward expansion was developing before the union victory. Furthermore the American historian Turner argues in 1893 that the official closing of the frontier in 1890 marked a huge turning point for America, American 'exceptionalism' have been attracted to the idea of a frontier mentality affecting Americans social and political attitudes. However Turners Theory did overlook the vast diversity of cultures and background that were in Western America, and mainly focused on American values, harsh individualism, unrestricted economic and believing in 'manifest destiny'. Therefore if Turners Theory was correct, then there must have been a significant change detected in US history which would mark 1890 as a Turning point. The development of immigration in America was changed substantially before the Civil war. The American WASP society greatly changed by 1817 as a variety of immigrants arrived. Alternatively the union victory is again not directly associated with immigration therefore it cannot be seen as a turning point, though it could be argued that a reunited USA attracted a great number of immigrations. ...read more.

However the Civil war was not the only sole factor that contributed to this, America was self sufficient. Therefore the Union Victory can be seen as a catalyst developing the economic growth of America after 1865, but can not be seen as a significant turning point. The huge influx of immigration was boosted even more after the union victory which was a significant change for the American population including the successful achievement of westward expansion which was quickly completed after the Union Victory as America was more determined on expanding its nation. However it could be argued that the lives of Native Americans were even more worsened after the union victory as they were isolated and neglected, their nature was not accepted and their demands were not taken in consideration. Furthermore the lives of African American was not changed significantly perhaps by law they were given limited rights but it did not improve their social position it was just another form slavery continued. On the whole the union victory drastically changed Americas position in the world as being a unified nation itself was a significant change. It enabled America to expand and develop into the world's most powerful country. ...read more.