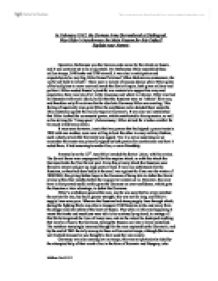 In February 1943, the German army surrendered at Stalingrad - Was Hitler's interference the main reason for this defeat?

In February 1943, the German Army Surrendered at Stalingrad. Was Hitler's Interference the Main Reason for this Defeat? Explain your Answer. Operation Barbarossa was the German code name for the attack on Russia, and it was certainly set to be a big attack. For Barbarossa Hitler assembled three million troops, 3500 tanks and 2700 aircraft, it was also in anticipation and expectation to be very big, Hitler himself claimed 'When Barbarossa commences, the world will hold its breath'. There were a variety of reasons shown while Hitler spoke of his bold plans to move east and invade the Soviet Empire, both given military and political. Hitler needed Russia's plentiful raw materials to support his army and population, there was lots of oil in the Caucasus and wheat in Ukraine. Hitler also had an obsession with racial ideals, he felt that the Russians were an 'inferior' Slav race, and therefore only fit as slaves for the idealistic Germany Hitler was creating. This feeling of superiority also gave Hitler the confidence as he decided there would be little resistance against the racially superior German's. It was also well established that Hitler loathed the communist power, which contributed to his expansion, as well as his striving for 'living space' (Lebensraum). ...read more.

At this point Hitler was very confident as to the progress being made, and was positively certain that the Russians no longer had any more reserves, but this turned out to be far from the truth. The Russians were in fact building up reserves, and the supply lines remained strong coming form the newly positioned factories in the safety of the east. It was from this confidence that the German attack of the 6th army was aimed straight at Stalingrad to take the city, and as this happened, Stalin ordered 'not a step back', and banned any civilian from leaving the city. Because of the strictness applied by the Russian officers this is therefore what happened, the Russians refused to retreat, and showed determination to hold their ground and not give up that sacred town. It was also a credit that, not only were the soldiers very patriotic, the people of the town pitched in to save their homes. There was also a sense of twisted fate, as the German attack helped the Russians in a way. At the start of the attack on Stalingrad, the Luftwaffe had heavily bombed the city, and so as the rest of the army caught up, it was actually easier for the Soviets to defend the large piles of rubble, especially with the snipers, than to defend actual buildings. ...read more.

In contribution to this, Hitler's well-voiced thoughts of supremacy spurred on a civilian reaction and so 250 000 people of Russia joined the resistance fighters. The Germans, if they captured resistance fighters were known to hang them, this however was not a deterrent but again spurred a further reaction for the Russians to aid their country in whatever ways possible. Hitler's hate of communism meant it blurred his vision and so clouded ability to make sound decisions, it was this that showed how Hitler's views had got the better of him. So, taking all factors into consideration, it is obvious that the Germans had the potential to win all the way, yet the factors shown just denied them of a victory. I still wonder though, if Hitler had put personal feelings aside, and withdrawn from Stalingrad when he should have done, would this have been such a large turning point in the war. In conclusion I feel that it was not solely poor decisions from Hitler that led to the German surrender in February 1943, but was the good strategy of the Russians through Stalin, and patriotism and determination of the Soviet society as one, purely refusing to lose, and give up the city of Stalingrad, bearing the profound name of their much loved dictator leader. Matthew Revill 11R ...read more.