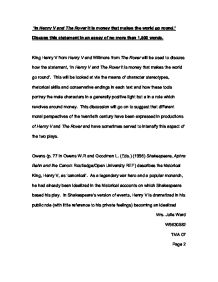 'In Henry V and The Rover it is money that makes the world go round.' Discuss this statement in an essay of no more than 1,500 words.

after observing him leave Angelica's house and boasting of his conquest, also supports the view that he should not be regarded too critically. This of course is in direct contrast to the behaviour of Henry V with regards to money. Willmore reveres money and will do anything to get money. He is manipulated by it and selfish in his means of obtaining money and therefore wealth. However, although money in The Rover is a central theme, it is treated almost comically with the use of Willmore's outrageous behaviour and other characters reaction to his greed. For example the reaction of Hellena when she sees him leaving Angelica's house. Mrs. Julie Ward W9630582 TMA 07 Page 4 The rhetorical skills of Henry V are persuasive in encouraging an audience to sympathise with the difficulties and responsibilities faced by a King and also to demonstrate how Henry V views money as a responsibility and not as a comical subject. Disguised as a common soldier, Henry V faces his most intense scrutiny about bringing his country to war when he is challenged by Williams: 'But if the cause be not good, the King himself hath a heavy reckoning to make' (Henry V 4.1.34-5). Though he can persuade the men 'Every subject's duty is the King's, but every subject's soul is his own' (Henry V 4.1.175-6), he cannot avoid reality that men will die in battle. ...read more.

While modern readers might imply criticism for Henry due to the commodification of Katherine, and Elizabethan audience would be aware of the importance of succession and thus would be more likely to view the event in a positive light. Jordan (1972), quoted in Shakespeare, Aphra Behn and the Canon) describes Willmore as a 'one man mardi-gras' (ibid. p.162) and interprets his marriage to Hellena as 'the passing of carnival and the acceptance of responsibility' (ibid. p.162). While there is no indication that Willmore has any intention of being a faithful husband, he appears on the surface to be well-matched with Hellena so in some sense a moral order is restored. In casting Willmore as a cavalier, money obsessed character, the marriage also restores a dispossessed supporter of the king to property; a just restoration of social order in the eyes of a contemporary audience of The Rover. This conservative ending, like that in Henry V, has the effect of drawing a metaphorical line under what has gone before and leaving an audience with a generally positive view of Willmore. Mrs. Julie Ward W9630582 TMA 07 Page 7 This discussion illustrates the fact that the statement 'In Henry V and The Rover it is money that makes the world go round' is relevant though in different ways. Money is portrayed differently in each play, one being comical and the other being serious and responsible. The different treatment of money in each of the two plays affects the meanings that are conveyed to the audience as has been highlighted in this discussion. ...read more.