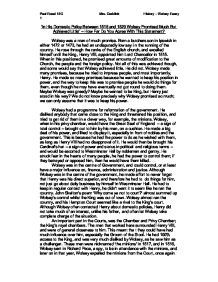 'In His Domestic Policy Between 1515 and 1529 Wolsey Promised Much But Achieved Little' - How Far Do You Agree With This Statement?

'In His Domestic Policy Between 1515 and 1529 Wolsey Promised Much But Achieved Little' - How Far Do You Agree With This Statement? Wolsey was a man of much promise. Born a butchers son in Ipswich in either 1472 or 1473, he had an undisputedly low say in the running of the country. He rose through the ranks of the English church, and excelled himself until the King, Henry VIII, appointed him Lord Chancellor in 1515. When in this positioned, he promised great amounts of modification to the Church, the people and the foreign policy. Not all of this was achieved though, and some would say that Wolsey achieved little. He did not. Wolsey made many promises, because he tried to impress people, and most importantly, Henry. He made so many promises because he wanted to keep his position in power, and the way to keep this was to promise people he would do things for them, even though he may have eventually not got round to doing them. Maybe Wolsey was greedy? Maybe he wanted to be King, but Henry just stood in his way? We do not know precisely why Wolsey promised so much; we can only assume that it was to keep his power. Wolsey had a programme for reformation of the government. He disliked anybody that came close to the King and threatened his position, and tried to get rid of them in a clever way, for example, the minions. Wolsey, when in his privy chamber, would have the Great Seal of England - a sign of total control - brought out to him by his men, on a cushion. He made a big deal of his power, and liked to display it, especially in front of nobles and the government. This is because he had the power to do as he wished with them, as long as Henry VIII had no disapproval of it. ...read more.

Wolsey came to have a reputation as a legal reformer, due to his massive energy and capacity for hard work. As historian Geoffrey Elton said of him in 1955, 'Wolsey gloried in the majesty of a judge, and although he had no legal training that we know of he possessed a remarkable natural ability for the task.' Because he was Lord Chancellor, and had to overlook the whole legal system, it only seems proper that he became a legal reformer. Wolsey was in the Courts almost every day, proving him a very 'hands-on' Chancellor, and his dedication to his job and to his King. His sittings as judge in the Court of Chancery only had a little impact, as he only made a few more cases than his predecessors, so not much achievement there. He sat in his Court, the Star Chamber more often, and had a big effect there. In 1516, he wanted to improve the legal system, so that it worked more efficiently, and was both fairer and cheaper. But, was this just another false promise? He claimed he would make an enhanced Star Chamber, which he did do. It was to enforce the law, and give a fair delivery of justice. It was a success in terms of the cases it got; 120 cases a year instead of the old 12. It made a massive increase in efficiency, and a mammoth achievement for Wolsey. He perhaps made a mistake when he introduced impartial justice, meaning anybody could be tried in court, even nobles. To make things fair, he encouraged normal people to bring cases forward concerning the nobles. This seemed a mistake; he very much grew to be disliked by the nobles. Wolsey seemed to suffer from another case of talking more than making actions. The increased caseload overworked the Courts, and overflow tribunals had to be created. He hadn't exactly totally reformed the legal system, as he had promised to do. ...read more.

It is clear that he knew how to raise money from the Church, and show himself as a good cardinal, but there was criticism from religious reformers that he had so many offices and the way he seemed to personify absenteeism and pluralism. He had many positions in different churches; Archbishop of York, Abbott of St. Albans, and held bishoprics in Durham and Winchester. In St. Albans, he made clergy members pay to carry out their duties there. He showed interest in every thing that he could make money in, and managed a vast income. Much of it was spent on Hampton Court. He was effectively in control of the Church, by the Pope, and King, and there is claim that this weakened the Church. Wolsey had achieved a vast income from the Church, due to being Papal Legate, although he had failed almost every reformation he promised to complete. In conclusion, I have found that it cannot be doubted that Wolsey achieved massive amounts in his time in power, He had gone from being a simple butchers son, to rising in power to become the phantom King of England. He held the position of Cardinal in the Church, and worked as a legal reformer, church reformer, government reformer, and 'champion of the poor'. He achieved many many things in his life, ntil his fall from power in 1529. Although he achieved so much, he did not seem to keep all of the promises he had made in his time. On many an occasion he had promised to do things, but never actually do them. Wolsey seemed to have a severe disorder in the way of actually taking action after he had claimed he would do things. We don't know if this was just because Wolsey was lazy, greedy, or just too busy, but it cannot be said that he did not achieve more than his lifetimes work. Paul Rossi 12C Mrs. Caddick History - Wolsey Essay 1 ...read more.

The author obviously has a great deal of knowledge and there is excellent detail in parts. Most of the evidence is well evaluated although some analysis could be developed further and there is occasional wandering from the point. 4 out of 5 stars.