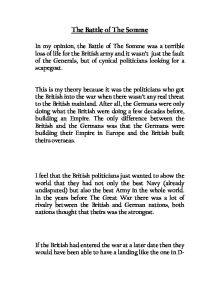 In my opinion, the Battle of The Somme was a terrible loss of life for the British army and it wasn't just the fault of the Generals, but of cynical politicians looking for a scapegoat.

The British could then attack them and could have made a quick advance to Germany. The British would have had another advantage, because the French and Russians would have given the Germans heavy casualties. The British army would also have been extremely well prepared with all the modern tactics, weapons and training and (in theory) they would have been unstoppable. The British Generals had nothing like this advantage and were always going to face an uphill challenge against the Germans. The British always had to attack because of all the pressure that the politicians were piling onto them. Whereas the Germans were content with the ground that they had and, as they didn't necessarily need to attack, they were able to make excellent defences. ...read more.

The Germans were amazed by the thousands of British men who literally were walking to their deaths. After the battle the British public found out for the first time the real, horrific details of the war. The politicians were in a tight spot so they shifted all the blame onto the generals and censored the fact that some divisions actually achieved their objectives. The worst part of the politicians scapegoating was the fact that even eighty years after the battle, the British public still blame the generals and call them names like "The Butchers of The Somme". In my opinion this isn't fair as the British Generals were put into their predicament by the politicians who got them into the war anyway. Is it worth all those millions of lives just to show that you are better than someone else ? ...read more.