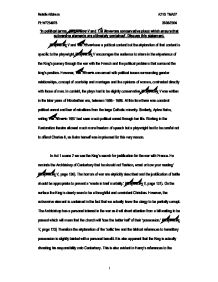 'In political terms, King Henry V and The Rover are conservative plays which ensure that subversive elements are ultimately contained'. Discuss this statement.

'In political terms, King Henry V and The Rover are conservative plays which ensure that subversive elements are ultimately contained'. Discuss this statement. King Henry V and The Rover have a political content but the exploration of that content is specific to the playwright. King Henry V encourages the audience to share in the experience of the King's journey through the war with the French and the political problems that surround the king's position. However, The Rover is concerned with political issues surrounding gender relationships, concept of courtship and marriages and the opinions of women, contrasted directly with those of men. In context, the plays had to be slightly conservative, King Henry V was written in the later years of Elizabethan era, between 1595 - 1599. At this time there was constant political unrest and fear of rebellions from the large Catholic minority. Similarly, Aphra Behn, writing The Rover in 1667 had seen much political unrest through her life. Working in the Restoration theatre allowed much more freedom of speech but a playwright had to be careful not to offend Charles II, as Behn herself was imprisoned for this very reason. In Act 1 scene 2 we see the King's search for justification for the war with France. He reminds the Archbishop of Canterbury that he should not 'fashion, wrest or bow your reading' (King Henry V, page 130). The horrors of war are explicitly described and the justification of battle should be appropriate to prevent a 'waste in brief mortality.' ...read more.

At Harfleur he encourages them to 'Disguise fair nature with hard-favoured rage.' (King Henry V, page 202) He makes the patriotic themes of honour and courage explicit and incites passion within those who hear him, referring to them as a 'band of brothers.' (King Henry V, page 291) He manages to turn his military from an under-fed and apprehensive huddle to a fierce fighting force of men. However, when wooing Katherine he speaks in prose and declares he cannot 'look greenly nor grasp out my eloquence.' (King Henry V, page 355) This is contrary to the impression we have gained through his political rhetoric throughout the play. So, is the King a passionate leader or an adaptable politician who can manoeuvre his language to suit his purpose? In contrast to the heavy military element of King Henry V, Aphra Behn's The Rover provides us with an insight into a woman's perspective of marriage and courtship through the Restoration era. Restoration drama dealt with the follies and affectations of high society, which provides a light relief to the Puritanism ethic. (Shakespeare, Aphra Behn and the Canon, page 132) The Rover opens with Florinda and Hellena discussing their potential futures. This itself is interesting that Aphra Behn chose to give women a public voice from the outset, and not only that, but the will and courage of the women is striking. Florinda is slightly more restrained than the feisty Hellena but they are both opposed to the idea of arranged marriages. ...read more.

His later anger doesn't serve to endear him any more to the audience than previously with his condemnations of 'damnable women [...] A generation of damned hypocrites.' (The Rover, page 226) the other element is the fact that Florinda is almost made to pay for Lucetta's crimes as Blunt uses his anger as an excuse in his attempt to rape her; 'Sir, must I be sacrificed for the crimes of the most infamous of my sex.' (The Rover, page 226) The political trend in both King Henry V and The Rover are both subversive to a point. As a spectator of King Henry V I would perhaps think the play exemplified an excellent leader and his astounding ability to reform himself for the good of his nation. I think the subversive elements of King Henry V are mainly contained within the text itself and a close reading provides us with an insight into the potential corruption of governing bodies. In contrast to this, The Rover is overtly subversive, it literally turns society's values on its head - proving that women have the potential to be an equal voice alongside that of men. The weaker sex is shown to be the male counterparts to a point - with Willmore's insatiable lust and Blunt's self-deceit. The women are witty, intelligent and independent within their own right. I think the strongest message comes from Angellica - advertising her wares and running and commercial business - just like Behn. Most women had to face the same choices and those that didn't conform were often morally attacked. ...read more.