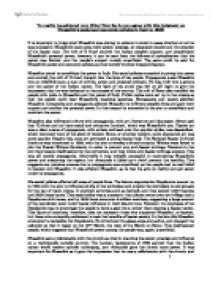 'In reality he achieved very little.' How far do you agree with this judgment on Mussolini's social and economic policies in Italy to 1940?

'In reality he achieved very little.' How far do you agree with this judgment on Mussolini's social and economic policies in Italy to 1940? It is important to judge what Mussolini was aiming to achieve in order to asses whether or not he was successful. Mussolini's main aims were power, prestige, an expansive empire and the creation of the fascist man. The 'cult of Il Duce' secured the Italian people's support, and consolidated Mussolini's personal power, however, it can be seen from the failures of radicalization that his power was limited, and the people's support merely superficial. The same could be said for Mussolini's social and economic policies as they merely 'window-dress[ed] fascism. Mussolini aimed to consolidate his power in Italy. His social policies succeeded in giving him power and control; the cult of 'il duce' brought him the love of his people. Propaganda made Mussolini into an infallible man; a man of culture, action and physical strength. He was built into a genius and the savior of the Italian nation. The light of his study was left on all night to give the impression that he was dedicated to the success of his country. ...read more.

Mussolini dismissed his Minister of Treasury, De Steffani in... and took personal control over the corporate state. Rocco Law in 1926 separated economic activity into syndicates, which aimed to harmonize industry by allowing the industrialists and the workers to work together. However the reality was that the industrialists maintained their power, as the state supported the Confudistra in most situations, and that the workers were weakened and controlled through the abolishment of independent trade unions, which was due to the ineffectiveness of the fascist trade unions. There was no real change in the structure of the economy. Neville described the corporate state to be 'vast, but a largely useless apparatus.' The failings of the corporate state suggest it was merely propaganda in order to gain prestige. This was initially successful, especially abroad, however, no real change was made, and the prestige and power it gave to Mussolini was largely superficial. However in reality Mussolini wanted a strong currency as a symbol of economic strength; this would give him prestige within Italy, and internationally. His economic policy, 'The Battle of the Lira' aimed to reduce inflation; Mussolini would 'defend the Italian Lira to [his] last breath' inflated the economy in 1926 to bring the lira back to its value in 1922, of 90 lira to the pound. ...read more.

This ambitious project aimed to build up the fascist nation, and provide an ample army of strong, militaristic Italians. Despite Mussolini's efforts the Battle for Births failed; the birth rate actually declined until 1936. Mussolini's attempt to exclude women from work, to encourage them to be mothers, also failed as women still made up 33% of the industrial workforce in 1936. These failures suggest that the Italian population were not devoted to securing a fascist nation, and that Mussolini ultimately failed. Ultimately it can be seen that Mussolini failed in his aim to prepare Italy for war, as his ultimate demise came with the failings of the Second World War. Autarky was unsuccessful, and mostly a propaganda exercise. In regards to creating a fascist nation, Mussolini did not have the support of the people, which lead to failure. However, Mussolini did succeed in gaining the adoration of the people through the cult of personality; this gave him his desired power and prestige. Despite this, when Mussolini made moves to radicalize his regime, he lost the support of the people, and eventually lost all his power and prestige. This suggests that the power he had, was merely superficial and evanescent. Thus, in conclusion, Mussolini did achieve very little in his economic and social policies up until 1940. ?? ?? ?? ?? 1 ...read more.