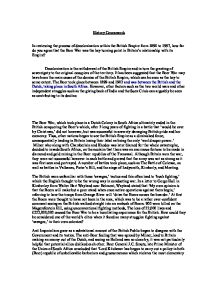 In reviewing the process of decolonization within the British Empire from 1890 to 1997, how far do you agree that the Boer War was the key turning point in Britain's relationship with its Empire?

History Coursework In reviewing the process of decolonization within the British Empire from 1890 to 1997, how far do you agree that the Boer War was the key turning point in Britain's relationship with its Empire? Decolonization is the withdrawal of the British Empire and in turn the granting of sovereignty to the original occupiers of the territory. It has been suggested that the Boer War may have been the main cause of the demise of the British Empire, which can be seen as the key to some extent. The Boer took place between 1899 and 1902 and was between the British and the Dutch, taking place in South Africa. However, other factors such as the two world wars and other independent struggles such as the giving back of India and the Suez Crisis can arguably be seen as contributing to its decline. The Boer War, which took place in a Dutch Colony in South Africa ultimately ended in the British conquering the Boer's which, after 3 long years of fighting in a battle that 'would be over by Christmas,' did not however, but was successful in severely damaging British pride and her economy. Thus, other nations began to see the British Empire as a diminished force; consequentially leading in Britain losing their label as being the only 'world super power.' ...read more.

It could even be considered that although the Boer War was overshadowed by the extreme loss of life and money, it helped highlight Britain in the sense that it highlighter her weaknesses and in putting an end to 'splendid isolation,' she began to search for allies in the form of the Anglo Japanese. There have been two theories as to the reasons behind the decolonization of India. The first theory, from an Indian perspectives depicts the idea that the Indians drove the British out through a substantional rise in Nationalism. The other argument which is believed by some historians is that after WW1, India was no longer economically viable or useful to the British, and so decolonizing it seemed like a good option as trading with India for goods such as spices was no longer needed. European Civilization threatened the traditions of India causing tensions between the Indians and the British as well as the fear that the British were trying to insert the Catholic church into India, causing a backlash. At first, the British were successful in holding back Indian rebels, an example being the Sepoy Mutiny in 1857 where Delhi was struck by rebels. ...read more.

it, as well as paying for reparations and causing a huge rise in foreign debt; making maintaining the Empire far less important. I believe the British and the rest of the world superpowers who formerly had colonies never really relinquished full control of former colonial countries back to the indigenous occupiers. I believe decolonization is a concept that does not really exist as the former colonizers have maintained a portion of control over the societies by means of military, economic and political influences. An example of such control being exerted is the neo-colonial control being orchestrated by the West today on poor countries such as ones in Africa. However, in the context of decolonization it is arguable to say that World War One was the most significant factor as it completely took the focus away from the Empire and crippled Britain's economy so much so that the Empire was becoming more of a nuisance than a profitable cause. This, coupled with a post war anti colonial Government, I think were the main reasons which spurred on decolonization. Although Nationalism in her colonies was clearly on the rise, it can not be disputed that after World War One, decolonization was no longer economically or morally viable anymore and out weighed the benefits of keeping on the Empire. ...read more.