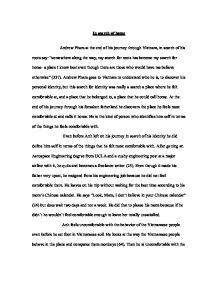 In search of home.

In search of home Andrew Pham at the end of his journey through Vietnam, in search of his roots say: "somewhere along the way, my search for roots has become my search for home- a place I know best even though there are those who would have me believe otherwise" (337). Andrew Pham goes to Vietnam to understand who he is, to discover his personal identity, but this search for identity was really a search a place where he felt comfortable at, and a place that he belonged to, a place that he could call home. At the end of his journey through his forsaken fatherland he discovers the place he feels most comfortable at and calls it home. He is the kind of person who identifies him self in terms of the things he feels comfortable with. Even before Anh left on his journey in search of his identity he did define him self in terms of the things that he felt most comfortable with. After getting an Aerospace Engineering degree from UCLA and a cushy engineering post at a major airline with it, he quits and becomes a freelance writer (25). ...read more.

He says that in Saigon, "everything has a buyer everyone is for sale" (104). Seeing beggar children devastated him (106). He gave them money and wept for them, " I wept for the disparity between my world and the world of these people" (110), but nothing made him feel comfortable with the living standards of the Vietnamese people. He felt helpless and confused the whole time he was touring Saigon with his relatives. He sees too much, too much for him to handle he says that it no longer mattered to him, his feelings, his culture. Finally he says, "Vietnamese.Honor.Obligations.respect. I hate it all" (107). Anh had more problems as a "Viet-kieu" in Vietnam than he did as a Vietnamese-American in America. The Vietnamese people mistook him to be Korean, Chinese or Japanese. He could not get on a train on the normal price because was a "viet-kieu"and did not look native (201). He could not stay in certain hotels because he was a "viet-kieu". He was over charged for every thing because he was "viet-kieu". ...read more.

After arriving in Hanoi he says, "The days pass without difficulty. I am at last among friends of similar sprit, all non-Asian, not one of them Vietnamese. And I am happy, comfortable merely to be an interpreter" (226). The only food he truly enjoyed eating were his Hershey bars. He craves for a scoop of orange sherbet, "Funny, a scoop of orange sherbet was all I could wrap my mind around"(261). The only drink he enjoyed drinking was coca-cola. He says that the familiar flavor of coca-cola kept him anchored in strange locales (310). His journey made him realize that he cannot really identify him self as a Vietnamese because he didn't feel comfortable there. That is why at the end of his journey he decides to be a better American and call America his home. When son asked him what he will do in America, he says, "The answer fell on me, a drop of water from a blue sky: "Be a better American" (341). Because that was the place he knew the most about, the place he felt comfortable at and the place he felt belonged to. In the end, he found his home and his identity in his zone of physical and emotional comfort. ...read more.