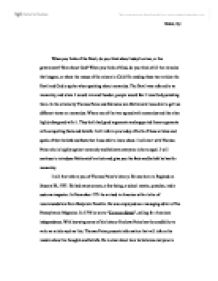 In the articles by Thomas Paine and Klemens von Metternich I was able to get two different views on monarchy. Where one of the two agreed with monarchy and the other highly disagreed with it. They both had good arguments and supported those arguments with

When you think of the Devil, do you think about today's crime, or the government? How about God? When you think of God, do you think of all the miracles that happen, or about the rescue of the miners in Chile? In reading these two articles the Devil and God is spoke when speaking about monarchy. The Devil was referred to as monarchy, and when it would rain and thunder, people would fear it was God punishing them. In the articles by Thomas Paine and Klemens von Metternich I was able to get two different views on monarchy. Where one of the two agreed with monarchy and the other highly disagreed with it. They both had good arguments and supported those arguments with compelling facts and beliefs. I will inform you today of both of these articles and speak of their beliefs and facts that I was able to learn about. I will start with Thomas Paine who is highly against monarchy and believes everyone is born equal. I will continue to introduce Metternich's article and give you the facts and beliefs he has for monarchy. I will first inform you of Thomas Paine's history. He was born in England on January 29, 1737. He had many careers, a few being, a school master, preacher, and a customs inspector. In November 1774 he arrived in America with a letter of recommendation from Benjamin Franklin. ...read more.

His second point against hereditary succession is that the ones that appoint the honor have no power to give the right to his child or child's child. For that might in the next succession put them under the government of a fool. Paine believes hereditary succession concerns mankind. He states that men who are born to reign are selected from mankind and their minds are poisoned by importance, and they act different from the world at large. They have little opportunity of knowing the true interests of the world and when they succeed to the government they are the most ignorant and unfit of any throughout the dominions. Hereditary succession is also evil, for the throne can be taken by a minor at any age. Meaning it could be easy to betray the trust of the king. Paine writes hereditary succession is the most barefaced falsity ever imposed to mankind. In England thirty kings and two minors have reigned in that kingdom, in which there have been eight civil wars and nineteen rebellions. Monarchy and succession have laid blood and ashes all over the world. Thomas Paine states "The nearer any government approaches to a republic the less business for a king". However, Metternich states that government measure seems to be inspired by fear. Prince Metternich was the leading figure in European government up to 1848. He was the political master of the Austrian Empire and the architect of an alliance system among the European powers after Napoleon's defeat. ...read more.

I believe in today's Western world Klemens von Metternich would feel more at home than Thomas Paine. Metternich believed that they should give attention to the financial state in their kingdoms, be strong but strict, maintain religious principles in all their purity, and not allow faith to be attacked by the social contract or visions. In today's world I believe these are highly important and focused on in every county. Now let's look back on what we have learned. We were able to see how two different men feel about monarchy and why they thought it was good or bad. We know now that Thomas Paine thought monarchy was created from the Devil himself. How people in the early ages of the world were happy. There were no kings and no wars. He believed everyone was created equal, and had a hard time understanding how a race of men came into this world better than others. He spoke of hereditary succession as the evil of monarchy, and how can someone set up his own family's future as reign. For their descendants might be far too unworthy to inherit them, and cause the government to be ruled by a fool. Now looking at Klemens von Metternich who agreed for monarchy, Metternich stated that government measure seems to be inspired by fear. He stated that monarchs should give attention to their financial state, be strong, yet strict, and let the monarchs strengthen their union, and ensure the political peace of Europe. ?? ?? ?? ?? Hudson, Pg ...read more.