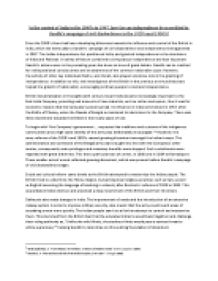 In the context of India in the 1840s to 1947, how far can independence be accredited to Gandhis campaign of civil disobedience in the 1920s and 1930s?

﻿In the context of India in the 1840?s to 1947, how far can independence be accredited to Gandhi?s campaign of civil disobedience in the 1920?s and 1930?s? Since the 1840?s there had been developing bitterness towards the influence and control of the British in India, which led eventually to Gandhi?s campaign of civil disobedience and independence being granted in 1947. The Indian Independence Act partitioned India, and granted independence to the dominions of India and Pakistan. A variety of factors combined to bring about independence and how important Gandhi?s actions were in the preceding years has been an issue of great debate. Gandhi can be credited for raising national consciousness and an awareness of the common nationalist cause. However, the activity of other key individuals Nehru, and Jinnah, also played a decisive role in the granting of independence. In addition to this, the intransigence of the British in the previous one hundred years helped the growth of nationalism, encouraging ordinary people to demand independence. British industrialisation in the eighteenth century meant India became increasingly important to the East India Company, providing vast amounts of raw materials, such as cotton and opium, thus it was for economic reasons that the Company?s power spread. Its influence in India commenced in 1757, after the Battle of Plassey, when the Nawab of Bengal surrendered his dominions to the Company. There was little resentment towards the British in their early years of rule. To begin with ?the Company?s government ? respected the traditions and customs of the indigenous communities and a high caste identity of the army was deliberately encouraged.?[1] However, the army reforms of the 1820?s and 1830?s caused growing discontent amongst the Indian troops. The administration and command of the Bengal army was brought into line with the Company?s other armies, consequently caste privileges and monetary benefits were stopped. Such curtailments were regarded with great bitterness. ...read more.

Indian nationalist leaders spoke out against British brutality; Nehru condemned it as ?absolutely immoral?[18], and ?indecent?[19]. Gandhi now became fully committed to his campaign, announcing that he could no longer co-operate with such a ?satanic regime?[20]. His first campaign began in 1920; the non co-operation movement which he believed would bring ?swaraj? (independence) within a year, and he urged Congress to follow this policy. Indians were instructed to resign British titles; lawyers, civil servants, police and soldiers were asked to resign; students to boycott government schools and politicians to boycott elections. However, the voters of the boycotted elections ?did not respond as readily as Gandhi had hoped,?[21] which contributed to the campaign?s abandonment. Whilst it involved millions of people and could be considered the ?perfect implement of mass resistance in the circumstances of twentieth century India,?[22] Gandhi was not able retain control of the developing movement, and one act of violence saw twenty two policemen killed. This led to the campaign being terminated in 1922. Subsequently, Gandhi was sentenced to six years in prison. In March 1922, the Government of India repealed the Rowlatt Act, and twenty three other laws. Gandhi was released from prison in January 1924, but by this time he was considered a spent force by the British. His radical philosophies such as the elimination of westernisation, made him appear increasingly out of touch, and he continued with the unrealistic aspiration of representing every Indian citizen. Co-operation between Hindus and Muslim broke down after the Satyagraha campaign and Gandhi alienated Muslims, as he seemed to only support Hindu interests. Gandhi was not politically active for most of the rest of the 1920?s arguably, because his support base had disintegrated; he was sidelined by the Indian people, no longer the ?leading spokesman of the independence movement.?[23] In 1927, the British government appointed a reform commission under Simon, in which there were no Indian members and it was boycotted by the Indian political parties. ...read more.