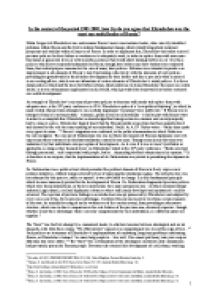 In the context of the period 1905-2005, how far do you agree that Khrushchev was the most successful leader of Russia?

﻿In the context of the period 1905-2005, how far do you agree that Khrushchev was the most successful leader of Russia? Nikita Sergeevich Khrushchev was and remains Russia?s most conscientious leader, who correctly identified problems within Russia and the first to initiate fundamental change, which would bring about sustained prosperity and stability within all aspects of Russia. In order to implement this, Khrushchev had either rejected previous policies for their failure or weaknesses to adequately work, in order to replace them with ones more functional at grassroots level, or to first produce policies that would allow initial growth to occur. It is these policies which have remained fundamental to Russia; though later leaders may have furthered or readjusted them, their initial purpose remained at the core of many later policies. Reforms were intended to produce an improvement in all elements of Russia?s state functioning collectively; with the intension of such policies providing the groundwork for their further development by later leaders and this is precisely what is noticed in succeeding offices, which saw an elaboration of certain elements of Khrushchev?s initial policies. It is these initial policies which laid the basis for further reform, which allow me to deem Khrushchev the most successful leader; as it was reformations implemented on his behalf, which provided the framework for further sustained successful development. An example of Khrushchev?s rejection of previous policies to function sufficiently and replace them with adequate ones, is the 20th party conference in 1956. Khrushchev spoke of a ?new political thinking?, in which he made visible, that previous attempts to successfully implement ?socialism? were ineffective.[1] If Russia was to transgress from its current position - economic, political and social instability - it had to part with former ways in order to accomplish this. Khrushchev acknowledged that transgression to economic and social prosperity had to come at a price. Khrushchev largely knew that the Russian political spectrum had been manufactured and dictated by the sole decisions-making of one individual: Stalin. ...read more.

meeting: economic growth was ?the key to all our problems...?[21] Though unaware that economic growth demanded general reformation, expected growth bore no noticeable gain and thus lead Gorbachev to recognise the necessity of Khrushchev?s earlier policies; that general reform accompanied economic expansion. Therefore the later office of Gorbachev saw a continuity and elaboration of Khrushchev?s primary policies. He re- engaged in the process of denunciation, stating at the 27th Party Congress: ?readjustment of the economic mechanisms begins with a rejection...? Peaceful co-existence was revisited; seen in the agreement with the US, to destroy intermediate-range nuclear weapons and the approval of the dismantling of the Berlin wall. Moreover, the civil and economic reforms of glasnost and perestroika, were but a build up of Khrushchev?s initial policies of reforming communism and decentralisation. Though McCauley argues Gorbachev?s reforms were pivotal to the creation of a civil state, the question is whether these policies would have been perused, if Khrushchev would have not laid the framework for their development? Likewise to Gorbachev?s initial perspective, Yeltsin perceived stability to be through economic might.[22] Yeltsin provided state initiatives (vouchers), with the purpose of creating a new entrepreneurial class (oligarchs), which would increase privately owned corporations; in turn pose similar benefits as Kulaks. Such a class would evolve into the dominant force to allow the economic structure of Russia to transform to one similar to western lines; as Yeltsin stated: the vouchers were ?a short ticket... to the free market.? The oligarchs creation, meant the majority of the state?s economic resources were tied within the oligarchs; yet they redirected their own resources in international investments, rather than Russia?s. The result was a misjudgement of the oligarchs function, as they produce no abrupt economic growth as hoped. Rather they stimulated the growth of a corrupt black market. Though these policies were unsuccessful, the fact remains that the previous failing economic structure was redeveloped to the point, were transgression to a new system which could be further developed, was conceivable. ...read more.

On the other hand, the source which permitted me to analyse the office of Khrushchev with the highest level of analysis, was M, McCauley?s THE KHRUSHCHEV ERA 1953-1964; published in 1995. This provided me with an intensive examination of different aspects within the tenure of Khrushchev: such as diplomatic, civil and agricultural reformations. Due to the book solely focusing on the office of Khrushchev, an in-depth analysis of all elements of his office have been included and investigated. This source proved indispensible in providing secondary sources: such as speech?s and letters which Khrushchev himself had written, thereby giving me an insight into the political thinking of Khrushchev himself. My understanding of Khrushchev?s tenure was further stimulated by J, Laver STAGNATION and REFORM: the USSR 1964-91 (1997); which although has a limited time frame, gave a continuous comparison of Khrushchev?s tenure and those within 1964-91, with a focus on how each one either influenced, or affected the political, civil and agricultural interventions of these leaders. Furthermore, the use of M, Sewell?s THE COLD War (2002) R, Sakwa?s PUTIN Russia?s choice (2008) and online publications (i.e. Khrushchev?s secret speech), has been useful in the comprehension of specific areas of communist rule. Certain aspects within the time frame of 1905-2005, have and remain under investigated: such as the Cold War, Khrushchev?s secret speech and Putin?s government. The use of these specific books and publications, has allowed me ? to a certain degree of depth ? to critically analyse these controversial issues. Though the conclusions which these sources provide on such ambiguous topics may be subjective and lacking definite evidence ? such as the direction of Putin?s current government ? it nonetheless proved vital, in my knowledge of these matters. I believe the use of such sources to have been absolutely critical, in my developed knowledge of the subject question. Though it is undeniable that they bare faults, the overall material which these sources provided, have been largely relevant and beneficial to my research. Therefore, I believe the use of these sources to have been necessary and effect, in answering the posed question. ...read more.