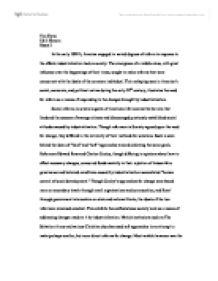 In the early 1900s, America engaged in varied degrees of reform in response to the effects industrialization had on society. The emergence of a middle class, with great influence over the happenings of their times, sought to make reforms that were conc

Tim Flynn US 2 Honors Essay 2 In the early 1900's, America engaged in varied degrees of reform in response to the effects industrialization had on society. The emergence of a middle class, with great influence over the happenings of their times, sought to make reforms that were concurrent with the ideals of the common individual. This reshaping seen in America's social, economic, and political realms during the early 20th century, illustrates the need for reform as a means of responding to the changes brought by industrialization. Social reforms in several aspects of American life lowered the barriers that hindered the success of average citizens and discouraged previously established social attitudes caused by industrialization. Though reformers in Society agreed upon the need for change, they differed in the extremity of their methods for solutions. Such is seen behind the ideas of "hard" and "soft" approaches toward achieving the same goals. Reformers Edward Ross and Charles Cooley, though differing in opinions about how to effect necessary changes, concurred fundamentally in their rejection of laissez-faire governance and believed conditions caused by industrialization necessitated "human control of social development." ...read more.

Moreover, economic changes were necessary for a more regulated and understood liaison between business, government and citizens. In 1904, 318 Corporations controlled $7 billion (40%) of US manufacturing investment capital. Consequently reformers turned to state politics, where progressivism reached its fullest expression. Robert La Follette's term as governor of Wisconsin was a model of progressive reform. He won from the legislature an anti-lobbying law directed at large corporations, a state banking control measure, and a direct primary law. Taxes on corporations were raised, a railroad commission was created to set rates, and a conservation commission was set up. In state after state, Progressives advocated for a wide range of economic reform and struck at the excessive power of corporate wealth by regulating railroads and utilities, restricting lobbying, limiting monopoly, and raising corporate taxes. Reform was also exhibited on the national level as an anti-trust movement swept through America. Both Presidents Theodore Roosevelt and William Taft led several campaigns against trusts; Roosevelt with 40 cases and Taft with over 90 brought them the moniker of "trust busters" Illustrating further the federal government's commitment, the Department of Commerce and Labor was added, making it the ninth Cabinet position. ...read more.

Additional reform ideas at the state level were the "direct primary" that enabled everyone to choose their party's candidate. Moreover, direct election of senators was approved by the state legislatures in 1913. Secret ballots and personal registration were also implemented to make sure that everyone voted honestly and responsibly, thus giving peace of mind to those of the middle class. Although women were extended rights to vote, minority, poor, and Black voters were not able to cast their votes due to complex rules and requirements; such were unfortunate failures of the progressive movement. Though remiss in addressing many of the needed reforms of day, the political changes during the progressive movement successfully increased the influence of the average American and put politics in general under a higher degree of criticism. The changes on society wrought by industrialization, necessitated reforms in several aspects of American life. Drastic improvements and restructuring in America's social, economic, and political spheres were made in reaction to the nation's inability to cope with, regulate and closely examine the repercussions of rapid industrial growth and prosperity. Through progressive reforms made in the American realms fore mentioned, the nation solidified the organization and regulation of its infrastructure and gave forums to those desiring improvement and change. ...read more.