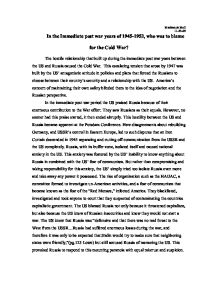 Mackenzie Moll 11-23-03 In the Immediate post war years of 1945-1953, who was to blame for the Cold War? The hostile relationship that built up during the immediate post war years between the US and Russia caused the Cold War. This escalating tension that arose by 1947 was built by the US' antagonistic attitude in policies and plans that forced the Russians to choose between their country's security and a relationship with the US. America's concern of maintaining their own safety blinded them to the idea of negotiation and the Russian perspective. In the immediate post war period the US praised Russia because of their enormous contribution to the War effort. They saw Russians as their equals. However, no sooner had this praise started, it then ended abruptly. This hostility between the US and Russia became apparent at the Potsdam Conference. Here disagreements about rebuilding Germany, and USSR's control in Eastern Europe, led to such disputes that an Iron Curtain descended in 1945 separating and cutting off communication from the USSR and the US completely. ...read more.

The US wanted to contain communism and expansion in Russia in order to insure their own power. They knew that Russia (as proved before in the previous paragraph) would not start a war and so then used the two countries clashing ideologies of capitalism vs. Communism/Stalinism to justify their intense dislike and actions taken against any Russian security or power. This rationale also gave the US reason to insure that the idea of peace with Russia was impossible. The US only cared about their safety and was further ready to sacrifice Russia's security to fulfill their own. The Marshall plan and the containment policy were clear US challenges to Soviet ambitions throughout the world, and an attempt to enforce Western influence and culture. Both policies aim was to obtain allies in the Middle East (Containment policy) or Western Europe (Marshall Plan), by aiding and loaning gross amounts of money to stop the "domino affect" of communism. This put Russia in a problematic position since countries in Russian control wanted to take part in the Marshall plan. ...read more.

allowed them to systematically spread their power and Western culture and in the Soviet's eyes, directly threaten their homeland security and pressed their fear of capitalism. This again happened in the Korean War and the Berlin airlift as the US interfered in Russian conflict to stop communism and deny Russia of its wishes. In conclusion although historians have a hard time blaming the start of the Cold War solely on one country, because both did provoke one another; in the end, it was America's aggressive behavior combined with their inability to compromise resulted in the Cold War. It is also important to note that the Cold War was not caused by just one thing but rather a build up of US policies and plans created to provoke and heighten tension with Russia. American is to blame by virtue of the fact that "with great power comes great responsibility." The US misused and exploited its' power, to impede on Russia's buffer zone, and the aggression that was displayed by the Soviet Union was a response to America's attempts to contain and isolate the USSR. ...read more.