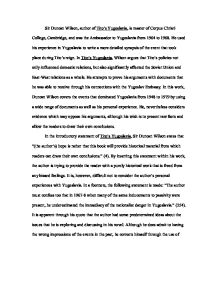 In the introductory statement of Tito's Yugoslavia, Sir Duncan Wilson states that &quot;(the author's) hope is rather that this book will provide historical material from which readers can draw their own conclusions.&quot;

Sir Duncan Wilson, author of Tito's Yugoslavia, is master of Corpus Christi College, Cambridge, and was the Ambassador to Yugoslavia from 1964 to 1968. He used his experience in Yugoslavia to write a more detailed synapsis of the event that took place during Tito's reign. In Tito's Yugoslavia, Wilson argues that Tito's policies not only influenced domestic relations, but also significantly affected the Soviet Union and East-West relations as a whole. He attempts to prove his arguments with documents that he was able to receive through his connections with the Yugoslav Embassy. In this work, Duncan Wilson covers the events that dominated Yugoslavia from 1948 to 1979 by using a wide range of documents as well as his personal experience. He, nevertheless considers evidence which may oppose his arguments, although his wish is to present raw facts and allow the readers to draw their own conclusions. In the introductory statement of Tito's Yugoslavia, Sir Duncan Wilson states that "(the author's) hope is rather that this book will provide historical material from which readers can draw their own conclusions." (4). By inserting this statement within his work, the author is trying to provide the reader with a purely historical work that is freed from any biased feelings. ...read more.

(28). Wilson argues that it was here that the Yugoslavian revolutionary seems to have begun his feud with Josef Stalin. Wilson continues by explaining that, although Tito established military assistance arrangements from the British and Americans, he was not able to do so with the Russians, who continued to downplay the strategic importance of his partisans, even after Great Britain had officially recognized them as the premier anti-Axis military force in Yugoslavia. He writes, "Military, technical and medical contacts between the British and the Partisans were close and often cordial." (29). He also argues that Tito's vociferous criticism of this Kremlin policy compounded by his incessant demands for Soviet aid agitated the paranoid and egomaniacal Josef Stalin, and set the stage for Yugoslavia's later difficulties with Moscow. On a political level, "in November 1943 Tito took some crucial steps toward establishing himself as the head of a national government for Yugoslavia." (28). In that year, Tito was promoted to the rank of Marshal of Yugoslavia, as Premier. Following the Russian liberation of Belgrade in 1944, the military might of the Yugoslavian Army was such that Tito felt sufficiently confident to secure the immediate departure of the Red Army from Yugoslavia. ...read more.

The extrication of Yugoslavia from the Communist international impacted the Yugoslav Communist leaders profoundly. Their emergence from this event did not result in an embrace of Western ideology, but a redirected and entirely innovative form of theoretical Communism that harbored sweeping decentralization, an increase in individual liberties, and an eventual independence and opposition to both NATO and the Warsaw Pact. Because Duncan Wilson makes an effort to present only facts about the events which took place in Yugoslavia from the time before World War II to the time of the publication of the book, there is little room for biased. It is, therefore, a good historical source for the extended essay. It is clear that the author strongly supports his main arguments through a detailed description of data, documents and evidence. He uses footnotes to explain unfamiliar and important details and refers to most of the significant details concerning Yugoslavia. It is important to note that Wilson's experience in Yugoslavia was strictly diplomatic and although personal ties could have been made, he attempts to disregard them and use documents and data about topics related to the development of Yugoslavia shortly before and during Tito's reign to depict the situation in Yugoslavia. ...read more.