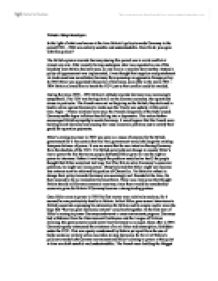 In the light of what was known at the time Britain's policy towards Germany in the period 1933 - 1936 was entirely sensible and understandable. How far do you agree with this opinion?

Yehuda Abayahoudayan In the light of what was known at the time Britain's policy towards Germany in the period 1933 - 1936 was entirely sensible and understandable. How far do you agree with this opinion? The British opinion towards Germany during this period was to avoid conflict at almost any cost. After recently having undergone what was regarded as one of the bloodiest wars Britain had ever seen, no one was in a mood to start another. Instead a policy of appeasement was implemented, it was thought that negation and punishment via trade sanctions would deter Germany from perusing an aggressive foreign policy. In 1933 Hitler was appointed Chancellor of Germany, soon after in the years 1935 - 1936 Britain allowed him to break the TOV just so that conflict could be avoided. During the years 1919 - 1933 Britain's attitude towards Germany was increasingly sympathetic. The TOV was having its toll on the German economy, the reparations clause in particular. The French were not as forgiving as the British, they believed in hostile action against Germany to make sure the Treaty was upheld. At this point i time Anglo - Franco relations were sour, the French occupation of the Ruhr caused Germany suffer hyper inflation thus falling into a depression. ...read more.

So far all of Britain's policies towards both German rearmament and Hitler's coming to power at this point in time was both sensible and understandable. The French were building the Maggot Line, a great line of defences down their border with Germany, so German rearmament was merely seen as a defence measure against their hostile French neighbour. Even if this rearmament was not justified by French hostility there is not much Britain could actually do. The only way to stop Germany would have been to send troops into Germany and stop production of arms and munitions or to go war with Germany. The British public as I am sure you are aware was not willing to support either of these actions, more so Britain did not have the available troops or finances to fight another war with Germany without crippling their economy. As for Hitler himself it is true many politicians were weary of him yet since his rise to power he had portrayed himself as an honourable trustworthily politician who wanted to defend his country and further enhance Anglo- German relations. To a large extent Britain was dependent of the actions of other nations to make any different course of action possible, in particular France and Italy. ...read more.

On the whole I would have to conclude that Britain's actions were thoroughly understandable and almost entirely sensible. Britain was fully aware that if she wanted to prevent Germany from perusing any of her threatening policies, military action would have to be taken. Both British public and government opinion was very "anti war", this was supported by Britain's weak economic position at the time. Britain could not afford nor did she possess the army required to wage a war with Germany. Most of Germany's actions had no effect on Britain in the short run, so a policy of appeasement was seen as a way to delay the problem until it could be solved, thus solving it before it could cause Britain any immediate problems. However was this policy of appeasement entirely sensible, the constant appeasement of Hitler rather than satisfying him, instead encouraged him. After seeing time and time again that the European superpowers was willing to appease, he attempted to size as much power and territory until he was no longer appeased. Yet he hoped that when that time came he would have seized enough power to deify the European powers and eventually conquer them. Which he would have done if it was not for the involvement of the USA and USSR. ...read more.