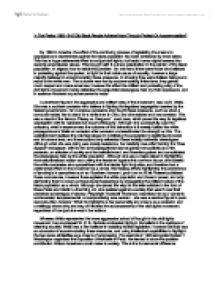 In The Period 1880-1915 Did Black People Achieve More Through Protest Or Accommodation?

In The Period 1880-1915 Did Black People Achieve More Through Protest Or Accommodation? By 1880 in America, the effect of the continuing process of legislating the means to segregate and discriminate against the black population had been embraced by most states. This had a huge detrimental effect to not just civil rights, but basic human rights towards the recently emancipated slaves. This brought with it a sharp polarization in the opinion of the black population, in regards how to tackle this problem. On one hand there were those who believed in protesting against the system, to fight for their noble cause of equality, however a large majority believed in accommodating these measures, in showing they were civilised beings and equal to the white man. The outcome was that by accommodating these laws, they gained much respect and made advances; however the effect the militant and protesting wing of the civil rights movement merely reiterated the prejudicial stereotypes held my their oppressors, and in essence hindered any advancements made. A prominent figure in the aggressive and militant wing of the movement, was Ida B. Wells. She was a southern protestor who believe in fighting the legalised segregation exerted by the federal governments. ...read more.

Whereas Wells represented the more aggressive school of thought in the civil rights movement, her counterpart W. E. B. De Bois contrasted highly in his beliefs in the methods of attaining equality. Wells was a firm believer in resisting federal legislation, however De Bois was an advocator of accommodating these measures, and using intellectual capabilities to highlight the two races similarities as a means of progressing. For example in 1900 alongside Booker T. Washington organised the Exposition Universelle in Paris. He wanted to show the positive contribution African-Americans could make to society. This is the fundamental difference between himself and Wells' school of thought, and highlighting the reason why his methods were more successful, as she only reiterated not just the perceived intrinsic differences between whites and blacks, but reinforced the racial stereotypes of the blacks and arguably showing how this race could never be integrated into American society. By founding the 'Niagra Movement' with William Monroe Trotter, advocating for the basic civil rights and the erosion of racial segregation and stereotypes, he showed his willingness to adapt into the perceived civilised and constitutional manner of American society, and emphasizing the advantages of giving full racial equality. ...read more.

Because of is very institutionalised thought of attaining civil rights and equality, he received criticism within the movement. Even De Bois once called him 'The Great Accommodator' as a result of his outlook on the issue. He responded by stating that confrontation would be detrimental to the cause, as the blacks would be massively outnumbered, so therefore cooperation with the whites was the only way to overcome racism. This admission and belief largely symbolises the reason that protesting was not as successful, as he identifies the power of public opinion, and how effective the mobilization of the population would devastate the movement, and this was something fundamentally Wells overlooked in her well intended aggression against the system. What has been highlighted by the aforementioned characters in the fight for civil rights in a post-reconstruction America is the power of accommodation in discarding the popular feeling of superiority over the freedmen. This showed the possible future integration of this once perceived inferior race, however, the protestation by some elements of the movement only reinforced the racially motivated stereotypes attained through the years of slavery by the white population. Therefore it is evident that accommodating paved the way for the successful struggle against the legalised segregation that had blighted the emancipation of the slaves. ...read more.