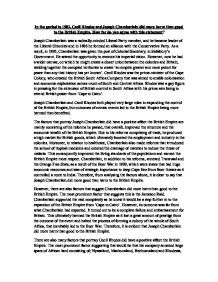 In the period to 1902, Cecil Rhodes and Joseph Chamberlain did more harm than good to the British Empire. How for do you agree with this statement?

In the period to 1902, Cecil Rhodes and Joseph Chamberlain did more harm than good to the British Empire. How for do you agree with this statement? Joseph Chamberlain was a radically-minded Liberal Party member, and he became leader of the Liberal Unionists and in 1886 he formed an alliance with the Conservative Party. As a result, in 1895, Chamberlain was given the post of Colonial Secretary, in Salisbury's Government. He seized the opportunity to execute his imperial vision. However, now he had a wider canvas, on which he might create a closer union between the colonies and Britain, welding together the occupied territories to create 'an empire greater and more potent for peace than any that history has yet known'. Cecil Rhodes was the prime-minister of the Cape Colony, who created the British South Africa Company that was aimed to enable colonisation and economic exploitation across much of South and Central Africa. Rhodes was a gay figure in pressing for the extension of British control in South Africa with his prime aim being to extend British power from 'Cape to Cairo'. ...read more.