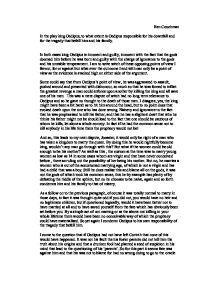 In the play king Oedipus, to what extent is Oedipus responsible for his downfall and for the tragedy that befell him and his family.

Ben Couchman In the play king Oedipus, to what extent is Oedipus responsible for his downfall and for the tragedy that befell him and his family. In both cases king Oedipus is innocent and guilty, innocent with the fact that the gods doomed him before he was born and guilty with the charge of ignorance to the gods and his unstable temperament. I am to write witch of these opposing points of view I favour, for or against but what ever the out come I end with can only be a point of view as the evidence is stacked high on either side of the argument. Some could say that from Oedipus's point of view, he was aggravated to assault, pushed around and presented with dishonour, so much so that he was forced to inflict the greatest revenge a man could enforce upon another by killing the king and all save one of his men. ...read more.

Still he does realise this and blame all on the gods, it was not the gods of which took his common sense, this he by example has plenty of by defeating the riddle of the sphinx, but no he chooses to be naive, again and so forth condemns him and his family to that of misery. As a follow on to the previous paragraph, of course it was totally normal to marry in those days, in fact it was thought quite odd if you did not, you would have no heir and no legitimate children, but if questioned logically, would it have been better not to have married at all and to have saved yourself from the fate which has obviously been set before you. By a simple act of not marring or as the above not killing in your whole lifetime there would have been no conceivable way of which the prophecy could have materialised. ...read more.

This could maybe be prohibited as she was a queen and had a higher status than other wife's. But you cannot miss that fact that Oedipus failed to restrain and control his own wife when she spoke ill of the gods and clearly defied them by denouncing the power of oracles as lies and deceit. This directly dishonoured Apollo as he is the patron of all oracles and when the god's power is dismissed only bad can come of that person in that life and the next. To conclude , I think there is enough evidence to blame Oedipus for his and his families downfall , through his rash decisions , naivety , paranoia , ignorance and short temper he doomed him self to a life of misery . This is supported by the fact that him blinding himself was not in the prophecy, it was his guilt of knowing what he had done and how easily he could have prevented it that forced the pin into his eyes, not the gods. ...read more.