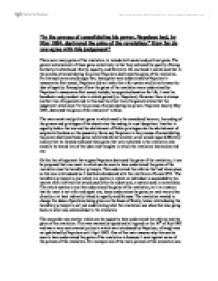 In the process of consolidating his power, Napoleon had, by May 1804, destroyed the gains of the revolution. How far do you agree with this judgement?

Another concept that reflects the gains and the principles is the civil code, introduced on 21st March 1804. This was founded on the work of successive revolutionary governments and hence followed the same line of thought as had been had by the revolution. Hence we can say that this is showing Napoleon not to destroy the gains of the revolution but actually to build on the gains of the revolution instead. A final point to examine is the extent to which the constitutional changes of the period to 1804 undermined the process towards democracy and liberty that was achieved during the revolution. The revolution can be argued to have achieved a very strong path towards liberty, freedom, equality and democracy. And the constitutional changes can be argued to have come along and very much undermined all that had been previously achieved by the revolution. However we do have to consider the point that has been proposed by historians, which is; that "Bonaparte could not suppress something which did not exist". ...read more.