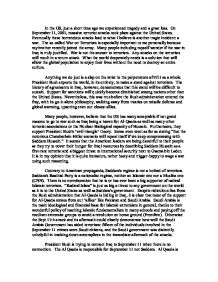 In the US, just a short time ago we experienced tragedy and a great loss.

In the US, just a short time ago we experienced tragedy and a great loss. On September 11, 2001, massive terrorist attacks took place against the United States. Eventually these horrendous attacks lead to what I believe is another tragic incident: a war. The so-called War on Terrorism is especially important to me personally because my brother recently joined the army. Many people including myself wonder if the war in Iraq is truly justified. War is not the answer to terrorism. Any attacks on the terrorists will result in a return attack. What the world desperately needs is a solution that will allow the global population to enjoy their lives without the need to destroy an entire culture. Anything we do just is a slap on the wrist to the perpetrators of 9/11 as a whole. President Bush expects the world, in its entirety, to make a stand against terrorism. The history of agreements in Iraq, however, demonstrates that this stand will be difficult to sustain. ...read more.

It is in my opinion that it is quite immature, rather hasty and trigger-happy to wage a war using such reasoning. Contrary to American propaganda, Saddam's regime is not a hotbed of terrorism. Saddam's Baathist Party is a nationalist regime, neither an Islamic one nor a Muslim one (CNN). There is no corroboration that he is or has ever been a big supporter of radical Islamic terrorism. "Radical Islam" is just as big a threat to any government on the world as it is to the United States as well as Saddam's government. Despite ridiculous lies from the Bush administration that Al-Qaeda is hiding in Iraq, it is clear that most of the support for Al-Qaeda comes from our "allies" like Pakistan and Saudi Arabia. Saudi Arabia is the main ideological and financial base for Islamic extremism in general, thanks to their wonderful policy of teaching Islamic fundamentalism in many schools and paying off the resultant extremist groups to avoid a revolution on home ground (Frontline). ...read more.

President Bush's motives to go to war with Iraq do not seem to be in the nation's best interest; perhaps his reasoning is personal. Our leaders need to know that war is a serious matter and it can only be undertaken for the most serious reason. Those reasons, simply put, are the welfare and safety of the United States and its people. United States is a nation that was well founded upon law not on any personal caprice. War must be the decision of the whole people, united behind its leaders. While war appears to be the quick solution for the American people and the American government, but I think we are missing the long-term goal. President Bush cannot expect the world to join us in fighting terrorism in the U.S., while it ignores the rest of the world's issues. We cannot overcome our reputation of imperialism and arrogance in much of the Arab world when our own allies perceive us as dismissive of their concerns. We need to change the opinions of our friends before we can change those of our enemies. ...read more.