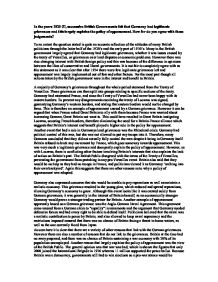 In the years 1925-37, successive British Governments felt that Germany had legitimate grievances and this largely explains the policy of appeasement. How far do you agree with these judgements?

In the years 1925-37, successive British Governments felt that Germany had legitimate grievances and this largely explains the policy of appeasement. How far do you agree with these judgements? To an extent the question stated is quite an accurate reflection of the attitudes of many British politicians through the latter half of the 1920's and the early part of 1930's. Many in the British government largely agreed that Germany had legitimate grievances, whether it was issues caused by the treaty of Versailles, or grievances over land disputes or economic problems. However there was also changing interest with British foreign policy and this was because of the difference in opinions between the likes of conservative and liberal governments. It is not fair to completely agree with as this statement as it was clear that after 1934 there were few legitimate grievances left and appeasement was largely implemented out of fear and other factors. For the most part though all actions taken by the British government were in the interest and benefit to Britain. ...read more.

Britain refused to back any movement by France, which goes someway towards appeasement. This was very much a legitimate grievance and does partly explain the policy of appeasement. However, as with Locarno, there is conflicting other factors involving Britain's interests that also explains the lack of action on Britain's part. The British Public disagreed with the terms of the Treaty of Versailles, preventing the government from partaking in any pro-Versailles event. Britain also said that they would be no help as they had no troops in France, and politicians viewed it as Germany 'walking into their own backyard'. Again this suggests that there are other reasons as to why a policy of appeasement was adopted. Germany also expressed concerns that she would be unable to pay reparations as well as maintain a realistic economy. This grievance resulted in the young plan, which reduced and spread reparations, allowing Germany's economy to grow. Although this event looks like it was created solely from German grievances, it was generally in the interest of Britain herself, as an economically stronger Germany would prove a stronger trading partner for Britain. ...read more.

Because Britain was a democracy, governments still had to win elections so a pro-war stance would be political suicide, therefore public opinion would have supported and explained a policy of appeasement. However public opinion relates back to German grievances as the public agreed with the German view that the Treaty of Versailles was too harsh. Another argument that could have an effect is the stance that that Great Britain didn't appease. Britain signed the Stresa Front in 1935 with Italy and France, stating that the Treaty of Versailles would not be changed any more than it already had been. However this was then broken by the British, due to a legitimate German grievance, but also a fear on the British part of a European war, as well as the threat from Japan. This then led to appeasement due to a combination of grievances and fear of war. In conclusion, German grievances explain part of the policy for appeasement, however behind each method of appeasement for German Grievances was a parallel contributing factor from Britain's point of view, which could be solved with the same actions as solving these grievances. This therefore suggests that other factors had a larger impact on using a policy of appeasement ...read more.