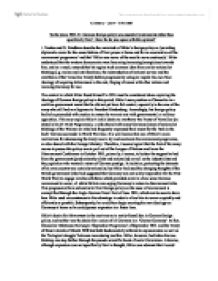 'In the years 1933-37, German foreign policy was essentially nationalist rather than specifically Nazi'. How far do you agree with this opinion?

'In the years 1933-37, German foreign policy was essentially nationalist rather than specifically Nazi'. How far do you agree with this opinion? J. Noakes and G. Prindham describe the main task of Hitler's foreign policy as 'providing diplomatic cover for the consolidation of Nazi power at home and for an acceleration of the rearmament programme' and that 'Hitler was aware of the need to move cautiously'. Hitler understood that the western democracies were becoming increasingly suspicious towards him, and as a result, ensured that his regime took common ideas from earlier nationalist thinking (e.g. racism and anti-Semitism, the reintroduction of national service and the overthrow of the Versailles Treaty) before progressively acting to imprint his own Nazi ideology of acquiring lebensraum in the east, forging alliances with other nations and rearming Germany for war. The context in which Hitler found himself in 1933 must be considered when exploring the ideology of German foreign policy in this period. ...read more.

This progression from nationalist to Nazi foreign policy on the issue of rearmament is exemplified through the Anglo-German Naval Pact of June 1935, which can be seen to show how Hitler used circumstances to his advantage in order to allow him to rearm as quickly and efficiently as possible. Subsequently, he could then begin exerting his own ideology on Germany at home so he could pursue expansion in a faster time. Hitler's desire for lebensraum in the east was not a newly-found idea in German foreign policy, and neither was the desire for a union of all Germans in a 'Greater Germany'. In fact, Chancellor Behtmann Hollweg's 'September Programme' of September 1914 and the Treaty of Brest-Litovsk of March 1918 had both fundamentally referred to expansionism as well as the 'biological struggle' between races during warfare. Hitler, however, had taken his race thinking one step further through the pseudo-scientific boost of social Darwinism. ...read more.

By showing some continuity with nationalists of the Weimar era, Hitler had ensured that initially he had not appeared greatly controversial or radical in his demands. However, despite his cautious approach to begin with, Hitler had used favourable circumstances to exploit the weaknesses of other nations in order to step up in his own Nazi policies. For example, he had managed to denounce the Versailles Treaty's armament limitations, increase pace of rearmament, leave the League of Nations, forge new alliances, reintroduce conscription and reoccupy the Rhineland in a short time period with little or no resistance. It is therefore apparent that, in 1933-37, Hitler had appeared to lay nationalist foundations on which he could then step up his rearmament programme in order to realise his underlying Nazi expansionist ambitions. However, he had done this whilst still satisfying the nationalist wishes of his government, industrialists, leading military figures and many of the German population. ?? ?? ?? ?? A2 History - Unit 4 - 27/11/2008 ...read more.