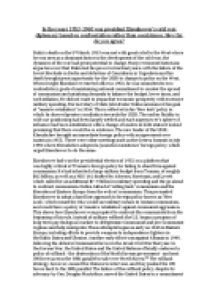 In the years 1953-1960 was president Eisenhowers cold war diplomacy based on confrontation rather than coexistence. How far do you agree?

﻿In the years 1953-1960 was president Eisenhower?s cold war diplomacy based on confrontation rather than coexistence. How far do you agree? Stalin?s death on the 5th March 1953 was met with great relief to the West where he was seen as a dominant factor in the development of the cold war, the dynamics of the war had great potential to change. Many revisionist historians argue however that Stalin lost his power in his final years; with the failure of the Soviet blockade in Berlin and defection of Cominform in Yugoslavia and his death brought great opportunity for the USSR to change its policy on the West. When Dwight Eisenhower entered office in 1953, he was committed to two contradictory goals of maintaining national commitment to counter the spread of communism and satisfying demands to balance the budget, lower taxes, and curb inflation. He did not want to jeopardise economic prosperity with excessive military spending. His Secretary of State John Foster Dulles announced his goal of "massive retaliation" in 1954. This is reflected in his ?New look? policy in which he showed greater conciliation towards the USSR. The earlier fluidity in cold war positioning had been largely settled and each superpower?s sphere of influence had been established, with a change of leaders in both states it looked promising that there would be co existence. The new leader of the USSR, Khrushchev brought an immediate foreign policy with an agreement over Austria in 1955. ...read more.

However by 1960 Eisenhower had the first solid-fuel nuclear , polaris, and was confident in US nuclear superiority and could implement his policy of ?brinkmanship? more effectively. Superpower relations collapsed further when on the 1st of May 1960 a U-2 spy plane flown by Gary Powers was shot down over the Soviet Union. The pilot survived and Khrushchev tricked the Americans, Eisenhower claimed it was a weather reconnaissance plane, however Khrushchev knew the truth. Eisenhower rejected Khrushchev?s demands of punishing the U2 pilot and only suspended the flights. The meeting broke up in acrimony and the Paris summit was cancelled. Eisenhower also confronted the British and French over the Suez canal crisis of 1956 where he refused to give support and thought they were there in order to regain their disintegrating empires in the Middle East and Africa. Eisenhower called a ceasefire on the 6th of November by diplomatic and financial pressure. This is a great example of Eisenhower confronting the areas of the cold war in the best interest of America. There was however an element of Eisenhower choosing to coexist with the Soviets as seen in the Hungarian uprising in October 1956, where he did not choose to intervene. 2,500 Hungarians died as a result of the rebellion and they were promised by a US backed radio that they would receive help, no such help was given and the revolution was brutally put down. ...read more.

Austria regained its sovereignty and took its place as a united and neutral state in Europe. The agreement was initialled in May 1955 and Dulles and the Soviet Foreign Minister Molotov appeared together on a balcony in Vienna. They did reach an agreement, which clearly demonstrates that there had been ease in tensions over this matter because it could have easily resulted in Eisenhower not wanting to co-exist. In conclusion, many historians see Eisenhower as American?s finest post war president as he managed to contain communism successfully. He had enlisted West Germany into NATO and its firm stance on the issue of Berlin had prevented the Soviets driving the Western powers out of the city. Eisenhower was sceptical of using his ?rollback? and ?new look? policy as it may have lead to nuclear war. He confronted the Soviets to a point, by dominating in the arms race and psychologically confronting them with the Free Europe radio. The reality behind his ?tough talk? was however unveiled during the Hungarian Crisis when he refused to do anything in order to aid the revolution, when he helped Nasser during the Suez Crisis, trying to make him towards USA rather than USSR, suggesting that he was looking for diplomatic ways of winning the conflict and showed a move towards conciliation in Berlin. He fought communism at the periphery but was worried an attack at the centre would lead to a hot war and therefore was forced to coexist with the soviets but would confront at the periphery. ...read more.