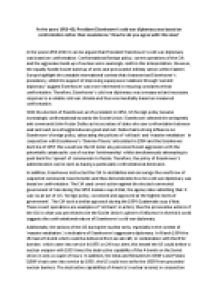 In the years 195360, President Eisenhowers cold war diplomacy was based on confrontation rather than coexistence. How far do you agree with this view?

service in 1955 on 24 hour alert, this meant the US could deliver a nuclear weapon with 1000 times the destructive capability of the A-bomb on the Soviet Union in only a couple of hours. In addition, the Atlas and Minutemen ICBM?s and Polaris SLBM?s had come into service by 1959, the US could now strike the USSR from grounded nuclear bunkers. The destructive capabilities of America?s nuclear arsenal, in conjunction with nuclear ?brinkmanship? and ?massive retaliation? is clear evidence that Eisenhower?s presidency was particularly confrontational towards the Soviet Union. However, it can also be argued that the actions of the USA during the arms race were an attempt to maintain parity with the Soviet Union and thus deter a potential nuclear strike. Despite the rhetoric of ?peaceful coexistence? the Soviet Union developed its own H-Bomb by August 1953, developed its intercontinental bomber the ?Tu20 Bear? by 1956, started the ?space race? by launching the satellite ?Sputnik? in October 1956 and developed the first ICBM in May 1957. ...read more.

Nevertheless the Paris Peace Accords in 1960 abruptly ended when Khrushchev stormed out following revelations of a successful shooting down of a U2 spy plane over Russia. Despite the undercurrent of distrust and suspicion which persisted between the superpowers, Eisenhower took great efforts to improve superpower relations and therefore his Presidency can be seen to be characterised more by coexistence rather than confrontation. In conclusion, President Eisenhower?s cold war diplomacy was an attempt to ensure coexistence between the superpowers with the use of confrontational diplomacy. Eisenhower?s ?face to face diplomacy? achieved a ?thawing? in relations between the superpowers, whilst the actions of the Soviets in Eastern Europe showed the rhetoric of ?massive retaliation? was more threat than fact. The build-up of arms was in response to both popular opinion and the Soviet nuclear threat. Although the covert operations of the CIA highlights a particularly reckless element of Eisenhower?s policy making. Overall however, the confrontational policy of Eisenhower was measured and an attempt to ensure coexistence through aggressive deterrent. ...read more.