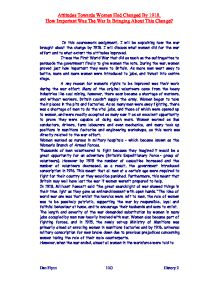 In this coursework assignment, I will be explaining how the war brought about the change by 1918. I will discuss what women did for the war effort and to what extent the attitudes improved.

In this coursework assignment, I will be explaining how the war brought about the change by 1918. I will discuss what women did for the war effort and to what extent the attitudes improved. It was the First World War that did as much as the suffragettes to persuade the government finally to give women the vote. During the war, women proved just how important they were to Britain. As more men went away to battle, more and more women were introduced to jobs, and thrust into centre stage. A key reason for women's rights to be improved was their work during the war effort. Many of the original volunteers came from the heavy industries like coal mining, however, there soon became a shortage of workers, and without workers, Britain couldn't supply the army. Women began to take their places in the pits and factories. As so many men were away fighting, there was a shortage of men to do the vital jobs, and those of which were opened up to women, and were readily accepted as many saw it as an excellent opportunity to prove they were capable of doing such work. ...read more.

hghjghjghjghjghjghjghjghjg However, when the war ended, almost all women in the workforce were told to leave their jobs when the men returned from battlefields. Although their rights were not equal, at this stage, I can safely say that their status was beginning to improve. The above key factor showed the people (men) of Britain that women who committed themselves to do work in helping Britain win the war, should be respected in public life as well as home life. Many praised and acknowledged gratitude towards these women for their contribution, some say that this is the most important reason to why women were finally accepted into society.ljlkjlkjkljkljkljjjjjjjlg. Another important reason was by the end of the war, the view of women had become very much old-fashioned. The war had brought about a change in the attitudes towards women and in the attitude of women towards themselves. Both upper and middle-class women believed they had finally won the right to work.hjhjhjhjhvgvvvvvvvvvvvvvvvvvvvvvvvvvvvvvvvvvvvvvvvvjhjhjhjhj Women became an established part of the work force and now fully realised that they could no longer be thought of as 'second-class' citizens. ...read more.

be changed, at this time, the Liberals had brought out a series of reformations, which later laid the foundations of the Welfare State In conclusion, I feel that the war was somewhat important in bringing about a change in women's lives. However, the war cannot take all the recognition, as there were also other relevant factors why women and their rights improved, i.e.: New laws for men, Liberal reformation and the Suffragettes.hkjhkjhkjhkjhkjhkjhhhhhhhhh What's more, women had heard of other democracies that had already given the votes to women, so they thought it would only be fair for the British Government to recognise their existence at long last.hjhkjhhhkhjhkjhkhkhkhkhh Women over the age of thirty were given the right to vote, and the government also passed a Sex Disqualification Removal Act, which allowed women the right to become lawyers, doctors, and accountants. In 1928, some ten years later,, the voting age for women was lowered to twenty-one and, equal to men, ending a chapter of struggle.. Attitudes Towards Women Had Changed By 1918. How Important Was The War In Bringing About This Change? Dan Flynn 11O History 2 ...read more.