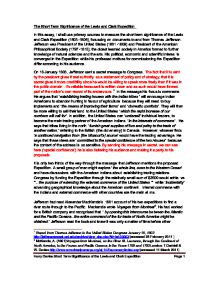 In this essay, I shall use primary sources to measure the short term significance of the Lewis and Clark Expedition (1803-1806), focussing on documents to and from Thomas Jefferson.

The Short Term Significance of the Lewis and Clark Expedition In this essay, I shall use primary sources to measure the short term significance of the Lewis and Clark Expedition (1803-1806), focussing on documents to and from Thomas Jefferson. Jefferson was President of the United States (1801-1809) and President of the American Philosophical Society (1797-1815), the oldest learned society in America formed to further knowledge of natural sciences and the arts. His political, economic and scientific interests converged in the Expedition while his professed motives for commissioning the Expedition differ according to his audience. On 18 January 1803, Jefferson sent a secret message to Congress. The fact that it is sent by the president gives it real authority as a statement of policy and of strategy; that it is secret gives it more credibility since he would be willing to speak more freely than if it was in the public domain.. It's reliable because it is written down and as such would have formed part of the nation's own record of its endeavours.1 In the message his focus is commerce. He argues that 'establishing trading houses with the Indian tribes' will encourage Indian Americans to abandon hunting in favour of agriculture because they will need to buy implements and 'the means of improving their farms' and 'domestic comforts'. ...read more.

It is also reliable because it sets out as clearly as possible what Lewis is expected to achieve. Jefferson emphasises the crucial importance of the information gathered on the expedition by requiring copies to be made of all observations and, even as he asks for details to be kept of Native American customs, he reveals his sense of the intrinsic superiority of whites over them ("civilize and instruct"). In Meriwether Lewis's first letter to Jefferson sent on his return to St Louis in September 18067, he starts with the success (original spellings used): 'in obedience to your orders we have penetrated the Continent of North America to the Pacific Ocean, and sufficiently explored the interior of the country to affirm with confidence that we have discovered the most practicable rout which dose exist across the continent' perhaps to soften the blow that they have not found a single navigable route. As instructed, he informs the President of the depth and length of each river and the land routes, as well as the months of snow that might obstruct easy trade. He tries to stress the positive: 'We view this passage across the Continent as affording immence advantages to the fur trade' before acknowledging that Cape of Good Hope will still be the preferable route to foreign markets. He warns that the British have plans to 'engroce the fur trade of the Missouri' and that the United States needs to be vigilant. ...read more.