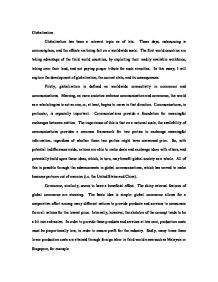 In this essay, I will explore the development of globalization, the current state, and its consequences.

Globalization Globalization has been a relevant topic as of late. These days, outsourcing is commonplace, and the effects are being felt on a worldwide scale. The first world countries are taking advantage of the third world countries, by exploiting their readily available workforce, taking over their land, and not paying proper tribute for such atrocities. In this essay, I will explore the development of globalization, the current state, and its consequences. Firstly, globalization is defined as worldwide connectivity in commerce and communications. Meaning, as more societies embrace communication and commerce, the world as a whole begins to act as one, or, at least, begins to move in that direction. Communications, in particular, is especially important. Communications provide a foundation for meaningful exchanges between entities. The importance of this is that on a national scale, the availability of communications provides a common framework for two parties to exchange meaningful information, regardless of whether those two parties might have conversed prior. So, with potential indifferences aside, nations are able to make deals and exchange ideas with others, and potentially build upon those ideas, which, in turn, may benefit global society as a whole. ...read more.

Returning to the subject of global commerce and its impacts, the post cold-war world had undergone major change. Many times, this change was detrimental, but there are a few beneficial factors as well. The advent of multinational corporations, in my opinion, has ruined the global society through means of intimidation and deception. Capitalism shines brightest through globalization, though all ideas associated (the invisible hand effect, as discussed by John Locke in "The Wealth of Nations," in particular) are not incorporated. However, the capital idea, that being the generation of revenue, flourishes. The idea of multinational corporations is to both manufacture and generate revenue in more than one country. Mitsubishi, for example, manufactures everything from microchips to motors, and accomplishes this to a great extent outside of Japan. What companies like Mitsubishi do is open factories in smaller countries, such as Malaysia, and manufactures all or part of a particular product there. The plus side of this is that the factories provide jobs and stimulate the local economy. Conversely, these companies also rule with an iron fist. Many times, the company is more powerful than the local government, placing the government at the mercy of the corporation. ...read more.

The customer service rating for Dell has taken a dive and may have hurt it sales and the long term public image. On the manufacturing side, many American customer service representatives lost their jobs because the Dell Corporation can save millions by having Indians answer their calls. This problem is deeply rooted in many sectors of the American job market. American programmers are laid off daily because there is a significant savings involved through overseas outsourcing. Communication becomes a detrimental factor that works with commerce in this industry as well. Advancements in remote access and availability have eliminated the need for local service techs and network administrators in the telecommunications field. The servers and other equipment that was administered locally can now be remotely administered from anywhere in the world. These factors serve to distract public attention from the real problem. Many times, outsourcing is seen as a tool to find more qualified candidates; such is the case with programmers or microchip manufacturers. However, the only real benefit here is the financial statements of the American corporations who choose to outsource their labor. The time of professionals may close soon, if nothing is done to stop the multinational corporations from ignoring the core ideas of globalization, which included ideas to benefit the entire global society, not the capitalists. ...read more.