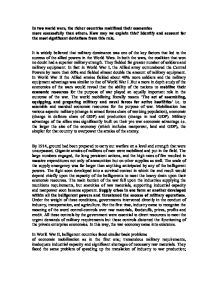 In two world wars, the richer countries mobilized their economiesmore successfully than others. How may we explain this? Identify and account for the most significant deviations from this rule.

In two world wars, the richer countries mobilized their economies more successfully than others. How may we explain this? Identify and account for the most significant deviations from this rule. It is widely believed that military dominance was one of the key factors that led to the success of the allied powers in the World Wars. In both the wars, the coalition that won no doubt had a superior military strength. They fielded far greater number of soldiers and military equipment. In fact in World War I, the Allied army outnumbered the Central Powers by more than 60% and fielded almost double the amount of military equipment. In World War II the Allied armies fielded about 40% more soldiers and the military equipment advantage was similar to that of World War I .But a more in depth study of the economics of the wars would reveal that the ability of the nations to mobilize their economic resources for the purpose of war played an equally important role in the outcome of the war. The world mobilizing literally means 'The act of assembling, equipping, and preparing military and naval forces for active hostilities' i.e. to assemble and marshal economic resources for the purpose of war. ...read more.

Pre 1914, economic factors were not as important as during the period of the great wars due to the inability of the government to mobilize the resources from industry and agriculture because too many people were required to work in the fields and workshops just to produce enough to feed the population, and it was economically unfeasible for the government officials to count, tax, and channel them into war. II The period between the great wars was unique. The dependence of military performance upon and pre economic development specifically holds true for this era in history. After World War II, the economic factors might have lost their significance again. This may be best summed up by the following. 'Since 1945 the economic factors in warfare may have lost significance again. This is because after the advent of nuclear weapons any rich country however small or any large country however poor could acquire devastating military force for a few billion dollars. Hence the marshalling of economic resources may have played a much more vital role in the outcome of the two world wars than was likely in any period before or since.' Source: Harrison, Mark. 2004. "Why the Rich Won: Economic Mobilization and Economic Development in Two World Wars. ...read more.