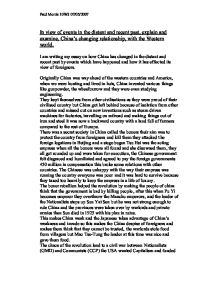 In view of events in the distant and recent past, explain and examine, China's changing relationship, with the Western world.

In view of events in the distant and recent past, explain and examine, China's changing relationship, with the Western world. I am writing my essay on how China has changed in the distant and recent past by events which have happened and how it has effected its view of foreigners. Originally China was way ahead of the western countries and America, when we were hunting and lived in huts, China invented various things like gunpowder, the wheelbarrow and they were even studying engineering. They kept themselves from other civilisations as they were proud of their civilised country but China got left behind because of isolation from other countries and missed out on new inventions such as steam driven machines for factories, travelling on railroad and making things out of iron and steel it was now a backward country with a land full of farmers compared to the rest of Europe. There was a secret society in China called the boxers their aim was to protect the country from foreigners and kill them they attacked the foreign legations in Beijing and a siege began Tsu Hsi was the acting empress when all the boxers were all found and she disowned them, they all got rounded up and were taken for execution, the Chinese government felt disgraced and humiliated and agreed to pay the foreign governments 450 million in compensation this broke some relations with other countries. ...read more.

China was affected by civil wars with Korea (1950's) and Vietnam (1960's) on its border, China felt America was getting involved again and what would happen if South Korea or South Vietnam was to win because these were both backed by America. This was the whole part of the cold war between America and China the Chinese had cold relations with the west because they were on Russia's side. Later on Russia and China fell out because China wanted the Russians to tell them the secret of making a nuclear bomb but Russia did not want China to be that powerful and they both fell into colder relations which meant that China could start talking to the rest of the world including America who were pleased and both China and America decided that they would have more to gain by friendship and a lot to lose from poor relations, America hoped to gain China as a huge market for its economic goods and China hoped that it could catch up with the west. America established a base in Taiwan because the GMD retreated there after they had lost the civil war and because they believed in Capitalism, this made China feel that they were going to be invaded by the USA but in the warmer relations (1979) ...read more.

The picture of Jiang and President Bush tells us that America and China want warmer relations, Bush dressed in Chinese clothes to please the Chinese President but soon relations got cold again because of a spy plane that crashed in 2001 over China, America asked for the plane back but the Chinese government wanted to know why they were spying on them, they also took the plane apart to the look at the technology it used then sent it back to America in boxes and pieces. When terrorists attacked America on September 11th 2001 China was one of the first countries to send a sympathy message to America this made relations warmer, but more recently China is against the war with Iraq so relations got colder again, however behind the scenes America could say that they would give them Taiwan if China helped America in the war. I think that Chinas relations with the west is getting better and that one day Taiwan will be part of China aswell as being the worlds superpower and a major trading country. My conclusion is that Chinas relations with the west has constantly been changing simply because they did not like foreigners or trust them but now they have more understanding about them and have warmer relations through trade and other things. Paul Morris 10W3 07/05/2007 ...read more.