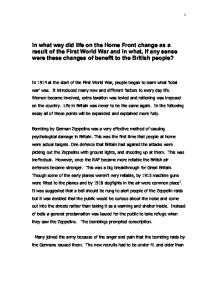 In what way did life on the Home Front change as a result of the First World War and in what, if any sense were these changes of benefit to the British people?

In what way did life on the Home Front change as a result of the First World War and in what, if any sense were these changes of benefit to the British people? In 1914 at the start of the First World War, people began to learn what 'total war' was. It introduced many new and different factors to every day life. Women became involved, extra taxation was levied and rationing was imposed on the country. Life in Britain was never to be the same again. In the following essay all of these points will be expanded and explained more fully. Bombing by German Zeppelins was a very effective method of causing psychological damage in Britain. This was the first time that people at home were actual targets. One defence that Britain had against the attacks were picking out the Zeppelins with ground lights, and shooting up at them. This was ineffectual. However, once the RAF became more reliable the British air defences became stronger. This was a big breakthrough for Great Britain. Though some of the early planes weren't very reliable, by 1915 machine guns were fitted to the planes and by 1918 dogfights in the air were common place1. ...read more.

This change was introduced for the first time in 1918 for the over thirties. This radical change in voting rights increased in popularity and changed Britain forever in the long term. The government was showing its increased power over the population by making women work bringing in censorship and the beginning of nationalisation. This manifested itself as the new law called The Defence of the Realm Act, (DORA). This Act entitled the government to take any land, factories, farms or other workplaces that were not producing products, which were a help to the British war effort. Lloyd George introduced the law in 1916 as a first start to try and 'Deliver the Goods.' The strategy was to make England produce more products with fewer profits going to the producers. Many owners of factories lost out on valuable profits. The whole industry of coal mining was nationalised by the government. Censorship came about because during the Battle of the Somme a film was produced and shown to the entire cinema going population of people being blown apart. Once the British government realised that this had been broadcast to such a wide audience it was too late to stop people being shocked and have their morale dampened. The government decided to watch every cinema film and to censor every newspaper published. ...read more.

The Government was forced to police rationing very strictly. When people wanted to get rations from shops they had to hand over coupons which would be given to them by the government depending on the size of their family. There were very high fines and penalties for people who did not abide by the rationing laws. People approved of the introduction of rationing because they thought of it as a fairer means of sharing out all available food. The rationing towards the end of the war improved the diet and health of many poor people. The home front changed as a result to the First World War. Were these changes a benefit or not to Britain? Certainly the improvement to Britain's air defences by the formation of the RAF has been of long term benefit to the country as, arguably, has been increased taxation. Women found independence and their ability to hold down jobs expanded the work force. This may have lead to higher unemployment but generally benefited the country as a whole. Censorship, conscription and rationing were not of much benefit except in war situations and were not desirable in the long term. Nationalisation has continued up to current times and its benefit or otherwise is hotly debated. 1 Walsh pg.44 2From Walsh 3 Taken from Source C, J.M Winter. The Great W ar and the British People 5 1 ...read more.