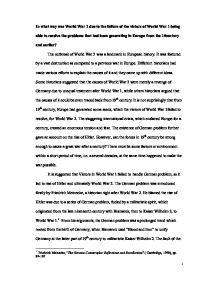 In what way was World War 2 due to the failure of the victors of World War 1 being able to resolve the problems that had been generating in Europe from the 19century and earlier?

In what way was World War 2 due to the failure of the victors of World War 1 being able to resolve the problems that had been generating in Europe from the 19century and earlier? The outbreak of World War 2 was a landmark in European history. It was featured by a vast destruction as compared to a pervious war in Europe. Different historians had made various efforts to explain the causes of it and they came up with different ideas. Some historians suggested that the causes of World War 2 were merely a revenge of Germany due to unequal treatment after World War 1, while others historians argued that the causes of it could be even traced back from 19th century. It is not surprisingly that from 19th century, Europe had generated some seeds, which the victors of World War 1failed to resolve, for World War 2. The staggering international crisis, which enslaved Europe for a century, created an enormous tension and fear. The existence of German problem further gave an account on the rise of Hitler. However, can the forces in 19th century be strong enough to cause a great war after a century? There must be some factors or environment within a short period of time, i.e. a several decades, at the same time happened to make the war possible. ...read more.

France, on the other hand, actively joined into the international crisis instead of averting them before World War one, while after it; she was so weak that she had to follow the policy of Britain. Also, both Britain and France appeased to Hitler aggression in the hope of satisfying him to prevent war, ironically turn out to raise the indulgence of Hitler creating more tension. Hence, it was palpable that the victors failed to alleviate the tension brought by international crisis, which made war drawing nearer. The fault of victors in the prolonged German problems and the staggering international tension could not give us with the whole picture vividly, since these problems along were not sound enough to explain the outcome of Second World War. Had German problem gave us the entire picture, Hitler would have got power in 1921, when he was leading a Putsch, then would Second World War started earlier? Despite the fact that international crisis did create fear up to a point that war seemed to be the only way to deal with such fear, but fear did not hundred percent equivalent to having a war. Fear had existed in 19th to 20th century among power for a long time, but within such period, only a handful of war could be witnessed. ...read more.

Germany was given Sudetenland, which was strategically important to Czechoslovakia, despite the fact that France had a little alliance with Czechoslovakia and she promised to support Czechoslovakia. Furthermore, Soviet Union was absent in collective security, so that it was only a "power-less"security system and could not guaranteed any peace. Soviet Union was being isolated due to the fact that she was a communism country. Yet, during the period of economic recovery, the relationship between the Western power and Soviet Union was improved by various agreements. With the rise of Hitler, Soviet Union even proposed to join with the West in collective security. However, the West did not trust Soviet Union. Soviet Union was not invited in Munich conference. John Keegan argued that "Western democracies preference for gambling on Hitler's reluctance to cross the brink rather than accept Soviet help to ensure that he did not"12. Stalin, being totally frustrated with the West, collaborated with Hitler even Hitler was anti-Slavic. Hence, the failure of collective security also facilitated aggression of Hitler and the signing of Nazi-Soviet non aggression Pact (1939) gave Hitler confidence in invading Poland, which marked the opening of Second World War. All in all, the outbreak of Second World War can be interpreted as a failure of victors in dealing with the problem in Europe starting in 19th century. However, those problems were not sound enough to give us full picture; there were some new problem after World War One leading to the outbreak of Second World War. ...read more.