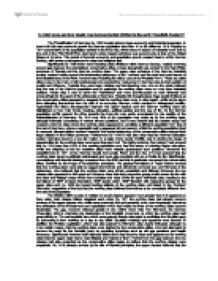 In what ways, and how deeply was German Society divided in the early Twentieth Century?

In what ways, and how deeply was German Society divided in the early Twentieth Century? The 'Prussification' of Germany by 1920 brought about a huge economic and industrial expansion. In trend with this vast economic growth the German population shot from 41 to 65 million by 1910. Notably by 1914 around 60% of the population resided in the inner-city, driven there in search of industrial work and by the end of the First World War, Germany's urban based workforce was second only to that of the United States of America. This period of frenzied economic and population growth created chasms within German Society, with severe consequences for class and religious ties. Significantly by 1920 there were imposing class divisions within German Society, notably revolving around gap between the ostentatious conservative elites, whose stronghold was centred in the East Elbian provinces of Prussia and the German working class. The upper class echelons of the German industrial society centred mainly around the landowning aristocracy of the 'Junkers' and the steel and coal barons of the industrial area of the Ruhr, however also including the officer core of the Prussian Army. ...read more.

with respective groups for the upper class and, by 1925 the inward looking attitude of the working class culminated in the 'Workers' Olympics', suggestive of the fact that the working class believed themselves to be completely different from the rest of the population. The division within society in relation to social classes appears much greater than it is apparent on face value; both classes bitterly despised each other. By 1871 the working class had already become envious of the upper classes who, whilst were extremely rich and powerful, were more importantly viewed as the arbitrators of the ill treatment and exploitation which had made the lives of the working class become intolerable. The gap, however widened greatly in the 1980's when Otto Von Bismarck, the German Chancellor, tried to champion the destruction of the Socialist movement, to which the working class had great affinity to. The anti-socialist laws which were passed directly attempted to annihilate the Socialist party by preventing it from working on a day to day affair; Socialist meetings and speakers were banned. In addition the Welfare Legislation ,which was also passed by Bismarck ,also clearly indicated, although by more subtle means, that the working class were loathed by the conservative elites, who ...read more.

The Zentrum drew support from all Catholics and it therefore ensured that the Kulturkampf failed, however the experience of persecution lingered on in the minds of the Catholics, who had been made to feel second class and oppressed; and thus the Zentrum received support for several decades. The religious division within Germany had become significantly clear with Catholics made to feel a subjugated minority, which directly resulted in them forming their own sub-culture. Catholic Trade Unions, social clubs, youth groups and leisure societies all came into existence and it was evident that Catholics wanted nothing to do with Protestants. Ultimately the religious division within Germany was a split between Protestants and Catholics, who were viewed with distrust and suspicion and responded fiercely by creating their own political party in order to protect themselves. In conclusion it is evident that within Germany there were deep rooted social divisions, which had resulted firstly from the issue of social class, where the conservative elites and the working class clashed, a division accentuated by the rapidity of the industrialisation of Germany, and secondly over religion which had resulted from the 'Prussification' of Germany and had left the country split down the middle, between Catholics and Protestants. ...read more.