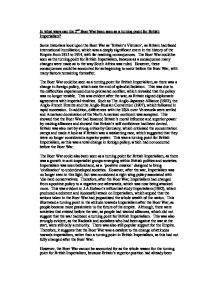 In what ways can the 2nd Boer War been seen as a turning point for British Imperialism?

Imperialism was seen beforehand, as a 'positive mission' designed to bring 'civilisation' to underdeveloped societies. However, after the war, Imperialism was no longer seen in this light, but was considered a right wing policy associated with 'die-hard conservatives. Therefore, after the Boer War, Imperialism had changed from a positive policy to a negative one afterwards, which was now being attacked more. This was evident in J.A.Hobson's influential study Imperialism (1902), which produced a coherent and successful attack on Imperialism, which argued that the actions taken in the Boer War had jeopardised the whole wealth of the nation. This illustrated a turning point in the attitude towards Imperialism after the Boer War, as people became more pessimistic to the future of the empire. Although, there were anxieties that existed before the war, as people had wanted alliances, which did not suggest that the war had been a turning point for British Imperialism. ...read more.

The Boer War was also not a complete turn around for British Imperialism, as it expanded as a result British trade and investment became even more important. This was supported by the economic statistics. This showed that between 1903 and 1914 British exports to the empire increased 32%, imports from the Empire increased by 31%, British trade with Africa doubled, and 42 % of all British overseas investment went to the Empire. Overall, the Boer War marked the dividing line between the passionate imperialism of late Victorian England and the loss of self-confidence in Britain that has typified the twentieth Century. The Boer War was not entirely a turning point for British Imperialism, but was the start of many of its features. However, it was also a catalyst, which brought changing attitudes and feelings of Imperialism and the future of the British Empire to the surface. ...read more.