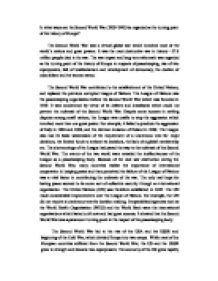 The Second World War was a virtual global war which involved most of the world’s nations and great powers. It was the most destructive war in history－37.6 million people died in the war. The war impact and long-term aftermath was regarded as the turning point of the history of Europe in respects of peacekeeping, rise of two superpowers, fall of totalitarianism and development of democracy, the decline of colonialism and the women status.

The Second World War contributed to the establishment of the United Nations, and replaced the previous corrupted League of Nations. The League of Nations was the peacekeeping organization before the Second World War which was founded in 1919. It was condemned by virtue of its defects and drawbacks which could not prevent the outbreak of the Second World War. Despite some success in settling disputes among small nations, the League was unable to stop the aggression which involved more than one great power. For example, it failed to preclude the aggression of Italy in 1936 and 1939, and the German invasion of Poland in 1939. The League also had its basic weaknesses of the requirement of a unanimous vote for major decisions, the limited funds to enforce its decisions, the lack of a global membership etc. The shortcomings of the League had paved the way to the outbreak of the Second World War. The events of the two world wars revealed the ineffectiveness of the League as a peacekeeping body. Because of the vast war destruction during the Second World War, many countries realize the importance of international cooperation in keeping peace and they perceived the failure of the League of Nations was a vital factor in contributing the outbreak of the war. The only real hope for lasting peace seemed to be some sort of collective security through an international organization. The United Nations (UN) was therefore established in 1945. The UN made considerable improvements over the League of Nations. For example, the UN did not require a unanimous vote for decision making. Its specialized agencies such as the World Health Organization (WHO) and the World Bank were the international organizations which lasted until now and had great success. It showed that the Second World War was a paramount turning point in the respect of the peacekeeping body.

The Second World War led to the rise of the USA and the USSR and beginning of the Cold War, which divided Europe into two camps. While most of the European countries suffered from the Second World War, the US and the USSR grew in strength and became two superpowers. The economy of the US grew rapidly because of the First World War. She was the creditor as she made use of her neutrality to trade with countries during the war. During the Second World War, her economy even proliferated. All types of her industries boosted and her GNP reached an unprecedented level. The invention of the world’s first atomic bomb also showed that she became a superpower after the wars. On the other hand, the USSR withdrew from the First World War because of the heavy financial burden. The government was overthrown and the Russian established the world’s first communist state. During the Second World War, the USSR stove to develop her heavy industries, producing a large number of weapons and airplanes. She gained much after the war. Together with the US, she grew into a superpower after the Second World War. However, the two superpowers had dichotomy in ideological, political and economic aspects, and they both aimed at dominating the whole world. The differences led to the beginning of the Cold War, and therefore, the Second World War could be regarded as a turning point to the history of Europe as the Cold War posed a new threat to the world peace.

The Second World War was a turning point for women because, for the first time, women were allowed to join the military, fly planes in noncombat missions, and work in munitions factories and other war-related industries. Before the Second World War women were thought of as just housewives, but after the war, they were seen as capable of "men's" work. WACs, WASPs, and Rosie the Riveters proved that they were capable and reliable. The Rosie the Riveters helped the United States defeat the Axis Powers in the Second World War by producing tanks, guns, artillery pieces, warships, and ammunition. Women were not confined to traditional roles but, instead, created new paths for women to follow. Women’s lives and status after the war signified an important trend in the post-war world.

The Second World War was regarded as the turning point of the history of Europe as it had long-term impact on the development of different respects of the history, by which it had influenced the prospect of humankind in the 20th century.